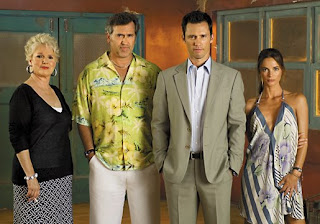 It usually isn’t a good sign when your summer love makes you burn.

But it’s different when it’s a Burn Notice.
Burn Notice is a relatively new show to Canada that is only seen on the rarely watched SuperChannel…..anyone? anyone? Anyone ever heard of Superchannel? There are four of them. Anyone? Nope? Yeah, that’s what I thought.
Anyway, unless you are one of the four people who actually own and watch Superchannel, you probably haven’t heard of Burn Notice.
Which is a shame because you are really missing out.
I just spend my entire weekend, (screw you summer) watching most of the second season of the spy show, which hits DVD shelves on Tuesday (in Blu-Ray too!)
To give you a little idea about the show, it’s a perfect series to pick up for the summer. It’s sexy and funny drama about a spy who gets his burn notice. Which basically means he has been black listed. Now he is stuck in Miami with his smoking hot ex-girlfriend, chain smoking mother and the always hilarious and reliable Bruce Campbell as his wise-cracking sidekick.
What could easily be a generic show is surprisingly original and entertaining. Learning the ins and outs of the spy world is a lot of fun. Plus the fact that the show takes place in Miami, brings a vibrancy to the show…without the blood and guts of DEXTER.
Is Burn Notice the best show on TV? No. But it sure is a lot more fun than most of them. A solid and entertaining show to pass away the summer.
Burn Notice: Season 2 comes on DVD tomorrow.
Season 3 is currently airing on Superchannel…if you can find it.