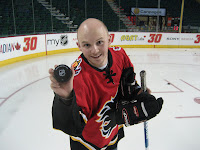 Tonight was a night legends are made off. Ok, maybe that’s a little dramatic, but it w 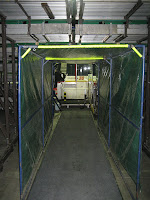 as still amazing! I played my very first game of hockey….on ice. OK it wasn’t a real a hockey game but I did get to skate and shoot some pucks on the home ice of NHL’s Calgary Flames! That’s right, me skating ont the same ice as some of Canada’s biggest hockey legends at the Pengrowth Saddledome!

It’s all very funny, cause I could literally count on one hand how many times I’ve ever skated! I have never held a hockey stick or shot a puck and this is where I do all of this? It was so surreal to walk through the aisle that the Flames walkthrough every time they play a game. Once on the ice….Wow, it was amazing to be looking up at the stands and see what the hockey players see. It’s weird cause the arena actually looks bigger 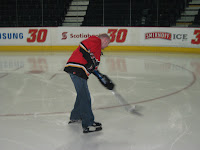 from the stands. As I attempted to skate around I couldn’t help but think….”Why do my feet hurt so much?!?” Seriously, what is up with hockey skates? They are not like slippers at all! Maybe thats why hockey shifts are so short. That must be it. Once I worked through the pain, I continued skating around the ice, eventually grabbing a stick and a puck and scored my first NHL goal…well actually it was after the 16th try, but still the puck did eventually go in!

After the goal, because it was so contrversial, I got into my very first hockey fight. 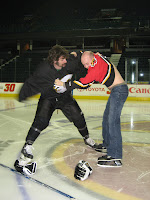 I won, of course, but it wasn’t pretty. Who knew I had it in me? Everyone thats ever fallen to these guns, that’s who. Chuckle, Chuckle.

Overall the whole experience was tons of fun! I’ve been so lucky to find these friends with such amazing connections, of course I pay them back with Hotel discounts, so then we both win! 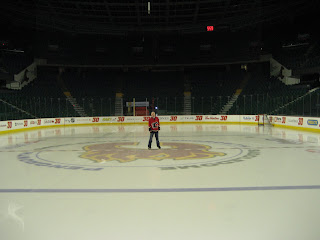 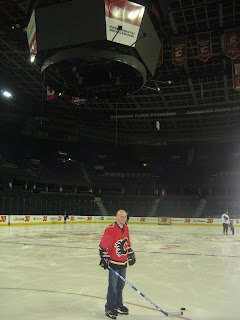