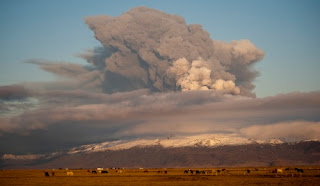 By now you’ve probably heard about the volcanic ash cloud heading towards St. John’s. And as luck would have it, I’m still here. I’m actually not supposed to fly out of here until Tuesday anyway, but who knows what any of that means. News seems to be changing every minute.

I think it was funny how we actually found out about the impeding cloud. While backstage, Michael Buble said that he would have to leave early, as his pilot had informed him of the cloud and that it would trap people here for a couple of days. Since his fiance is from Argentina and had to work, he would have to leave immediately to make sure she got out of Newfoundland and time. The cloud was news to us and with that, it immediately became the biggest story out of the Junos this side of Bieber.

As soon as the news was announced, hundreds of people stormed the airport. I had some friends that decided to risk it and they actually made it on. They said that over 500 people showed up for a flight that only fit 200. Justin Bieber and his 20 person entourage also made it on.

For the rest of us, no one is quite sure how long we’ll actually be here. I’m going to go to bed now. Things might be very different when I wake up, or everything might be the same. For now, I have a feeling I might be here for a very, very long time.