Steve Martin is coming to make me cry. 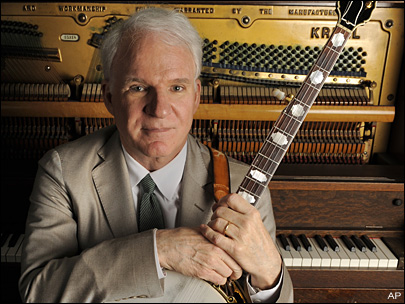 In the entire world, there are precisely two different celebrities that if I ever met, I would instantly cry: Kelly Clarkson and Steve Martin.

It’s a short list, with a little variety, but one that I know to be true and on July 21st, I might be able to cross one of those names off of Celeb Cry list.

It’s been announced that Steve Martin and his band The Steep Canyon Rangers will be doing a small tour in Canada, and I barely know what to do to contain my excitement.Â  (I wanted to put an exclamation mark there, but even that didn’t seem to do my excitement justice.)

I’ve read Steve Martin’s autobiographyÂ Born Standing Up: A Comic’s Life eight times, and without sounding like a crazy person, it is the closest thing I have to a bible. Okay, fine, it sounds crazy, but you should all read it. It’s a great story about following what you kinda know that deep down you should always be doing with your life. The fact that it’s funny is an added bonus. It also makes it completely different than an actual bible.

Here are the tour dates:

Tickets for the Sudbury show are already on sale, Ottawa go on sale on April 12th and Edmonton and Calgary can buy their tickets two days later.

I’m pumped for the Calgary show and I’m strongly considering going to the Edmonton show too.Â  Anyone want to come for a road trip?