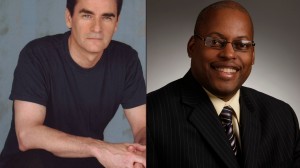 Remember a couple of months ago when Alberta Minister Lindsay Blackett asked a panel at the Banff World Television Awards “Why does Canada produce such shit?” (watch video) Ugh.Â  Sure you do. I’m still mad about it.Â  Apparently so are a lot of people, and thankfully this isn’t an issue that has gone away quietly. It has also been great to see people not asking for the ministers resignation, but instead asking what is Blackett going to do about this so called “shit”.

Well last week on CBC’s The Q, Guest Host Zaib Shaikh moderated a very important panel to discuss Canadian Telelvision with the minister and one of our country’s most respected actors Peter Keleghan from CBC’s 18 to Life.

I would really like for all of you to take a moment to listen to the piece. Click here and then go to August 25th.Â  It was really good to hear the two sides discuss the pros and cons of our entertainment industry.Â  Even if you don’t know any actors, writers, directors or anyone else involved in making a television show, it is important to know what you specifically can do make sure that we continue to produce quality shows, which will someday help with the quanity.

You know the debate is going to be good, when Shaikh asks Blackett on the first question: “What shows do you think are *bleep*?”Â  Blackett coyly responded:Â  “What I was refering to was a lot of the stuff that we fund that never even makes it to television.“Â  Can I just going ahead and say that that is a bullshit answer.Â  Does he really think that everything that gets funded will be a huge success on television or even make it to the airwaves? I mean how hours has his government spent on bills and reforms only to have them never see the light of day.Â  If Blackett can show me anything in this world that has a 100% success rate from start to finish, then I’ll show him my jaw nailed to the ground.

As actor Keleghan later points out, the States are notorious for making hundreds of pilots, it is called Pilot Season. They are supposed to be trials runs. While it would be great to see every single new show go from development to full-season orders, it just doesn’t happen.

But please listen to the piece yourself: Click here and then go to August 25th I can go on forever about it.Â  And once you’ve listened, make sure you have your say. Either in my comment section or The Q’s.Â  I really would like to keep this discussion going.