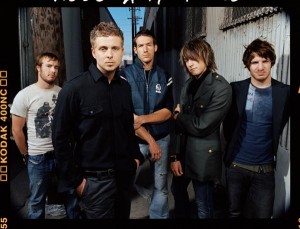 The best part of the Calgary Stampede every year are the mini-donuts.

Another cool part is the Coca Cola stage. Â If you’ve never been, the stage plays hosts to some usually pretty cool bands during the two week Stampede. Â The shows are free, but unfortunately the stage is not ideally located and you usually end up squished next to the sweaty rejected extras from Degrassi. You win some, you lose some.

After much hype, the line up has finally been announced.

As with every year, there are some good acts (OK Go, Barenaked Ladies), some acts that you thought were all the same band (Faber Drive, Marianas Trench, The Stereos), the “who the hell are they” (Crash Karma) and some oldies, but goodies (Glass Tiger).

But there is always one band. Â One band that makes me get to the grounds early, set up my blanket in front of the stage, pee in a bottle all day and get way to excited for. Â This year’s band is OneRepublic. Â Scoff if you want, but I freaking love OneRepublic. Â I love their albums, I love their songs, I love how they write music purely to get played on tv shows and I love how they make no apologies for it.

Which act are you excited for?

Here is one of my favourite OneRepublic songs!