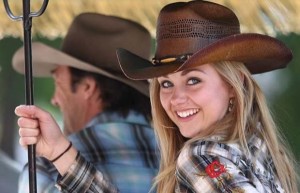 In the years that I’ve been writing a blog about Canadian entertainment, there’s one thing I learned over and over again: People LOVE Heartland.   Now I’m not one of those people, by that I mean I’m not obsessed, but there are some people out there who go crazy for the Alberta-filmed show, which is why for the past four seasons it has pulled in way more than a million viewers each and every week.   The success of the show has even been felt on Mike’s Bloggity Blog, some of my stories about Heartland, including my set-visit last year, are some of my most read blog posts ever.  If American teens have Twilight, then Canadians have Heartland.

But as with any show that has intense fans, sometimes things can get out of hand and the drama can do from the tv set to real life…fast.

That’s what happened last night on the set of Heartland, when a fan showed up with a newly purchased rifle and more than 1,000 thingamabobs of ammo.  Sorry, I’m not too familiar with weapons.

The mans name is Jacob Glas and he had allegedly been sending aggresive letters to the show’s star, Amber Marshall, for the past few weeks. Luckily the man was stopped by set security, then eventually the cops and no one was ever harmed, but I can imagine it was scary real life scene for Marshal, who eerily enough once played Elizabeth Smart in a TV-movie.

I’m very happy that everyone is safe!

The new season of Heartland has already continued filming and will be seen on CBC this fall.