Spend your summer with the Queen! 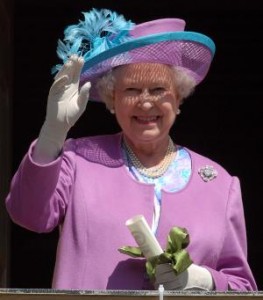 No, not Elton John (actually,Â he is coming too), I’m talking about Queen Elizabeth II.

Are you thinking what I’m thinking? Regis and Kelly with the Queen!!!! Gilman would have a field day!

Sadly, she won’t be visiting PEI.

Instead, The queen will be visiting Halifax (June 28th-June 30th), Ottawa (June 30th-July 3rd), Winnipeg (also on July 3rd) and then she is off to Kitchener-Waterloo until July 6th.

Looks like Western Canada will be Queen-less this time around. I bet those four Alberta Seperatists are going to have a field day with this. (Yes, they really do exist.)