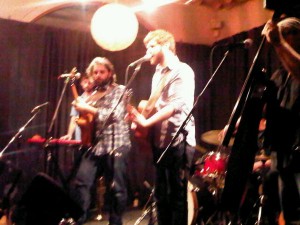 Well I just could not wait until Wednesday at Knox United to see Dan Mangan so I made the trek on Monday to see him and his band play in Canmore; here is a little sneak peek. Let me say this, if you have not already gotten your tickets for Wednesdayâ€™s show wait no longer, buy them right now.

Dan Mangan is a rising star in the Canadian music scene, his latest album Nice Nice Very Nice was shortlisted for this year’s Polaris prize and while it did not win was certainly one of the strongest in the field. Tonight he played songs form that album as well as from his first offering Postcards and Daydreaming and as a special treat a number of new songs as well. Tonight he was performing as a five piece band and the full rock sound was almost too much for the small, intimate room at Communitea, the packed house was fully engaged and there was so much energy and sound in the room that the doors were open in spite of the first storm of winter taunting us form outside. There were hot trumpet intros, blistering guitar parts, a bass solo that was all groove and even a mid-song breakdown that had all the musicians on stage clapping arrhythmicallyâ€¦and that was all in the very first song! If you have not seen Mangan live this is certainly a great way to be introduced to him and if you have seen him perform in one of his pared-down shows this will be a great way to rediscover him.

If you are looking for a real treat, make sure you get there in time to catch opening act The Burning Hell, they flaunt the line between music and comedy with a very well crafted three-piece of a ukulele, cello and guitar; not to be missed!