Sneak A Peek: The Dating Guy 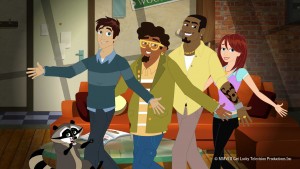 Ever wanted to see a cartoon boob but not have to go to a website that starts with the letter X?

Well Teletoon’s new show The Dating Guy is for you!

Think of a show that you and your buddies would try to make after watching marathon-viewing of It’s Always Sunny in Philidelphia, while getting drunk and making an online dating profile and you pretty much have The Dating Guy.

Not as polished as The Family Guy, yet funnier than American Dad, The Dating Guy is a different kind of animated show, that shows us how far our Sunday night comedies have come since The Raccoons.  (I’ll give you a minute to reminisce about Cyril Sneer.)