Sled Island: The Little Festival That Should

>Also available on The National Post’s The Ampersand

Calgary isn’t really known for it’s culture. This maybe shocking to some, but not to most.

Sled Island is a multi-venue independent music and arts festival that started out small and rather quickly, over the past four years, has grown into one of Calgary’s most interesting and innovative events and you’ve probably never heard of it.

But for the past five days, this city has been flooded with many of Canada’s most influential and creative independent artists for the festival, all the while sitting in the shadow of the impeding Calgary Stampede.
The two events couldn’t be more different. One is small, refreshing and relatively unknown. The other is large, overwhelming and frustratingly over-hyped. If you were to ask anyone outside of Calgary about Sled Island, they’d probably have no idea what you are talking about.

Admittedly, this too was my first Sled Island. After spending most of my weekend watching shows (Hot Little Rocket, Ladyhawk, Holy Fuck, Women), watching films (I Need That Record), checking out art shows (Chris Millar, Rob Kelly) and generally having a great time, I’m happy to declare that Calgary is no longer a cultural dead zone I was thought it was. As a maritimer transplanted to the city, I’m becoming more and more impressed by the arts community in this city and Sled Island only strengthens my argument. 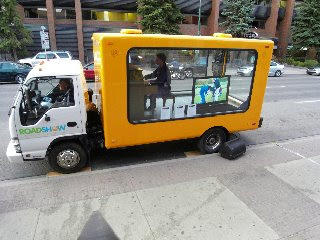 The quick success of the festival is even more impressive when you consider how hard Calgary makes it for any festival not involving cowboys to succeed. The costs of putting on a small 5-day festival would blow the minds of even the most veteran of event organizers. And yet somehow Sled Island organizers were able to make it work.
My hope is that festivals like Sled Island are given the chance to succeed and continue and will eventually show the rest of this country that we are much more than cowboy hats, mini-donuts and crazy right wing conservatives. We have a burgeoning artistic community that deserves to be put on the national spotlight similar to the Stampede.

So while you may have never heard of Sled Island, I have no doubt that you will someday.