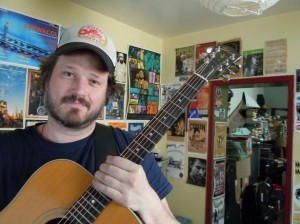 Have you ever used your Canadian Tire money? Â It’s sorta how are parents collected points to get free stuff, before all of the rewards and membership clubs started collecting points for us. Â I know for a fact that I’ve never used a single penny of Canadian Tire money, as I’m sure you Â haven’t either.

Well, meetÂ Corin Raymond. Â He’s a Toronto musician who is hoping to collect enough Canadian Tire money to fund his next album! Â Now that is a LOT of money!

Believe it or not, the singer/songwriter found a studio in Toronto that will except Canadian Tire for par! Â Yes, seriously. Who knew there was such a thing. Â ApparentlyÂ the owner of the recording studio thinks that you can always buy supplies from the giant Canadian department store, so why not except it for cash. WOW. Â I wish universities were like that! 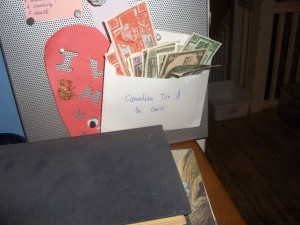 So three weeks ago Raymond launched a Facebook page and website in an effort to collect as much money as possible. This weekend, he’ll be recording his new album at a series of live gigs and would like to have enough CT bucks to cover the huge expense. I actually really enjoy his website, because he’s been documenting all the donations and who they came from. It’s really impressive to see that so many people still hold on to Canadian Tire money and yet are so willing to give it up to a complete stranger! Â So far the musician has raised more than $300 and hopes to have $1,000 by this weekend!

Do you think he can do it? Â Have some money you’d like to see be put to good use?