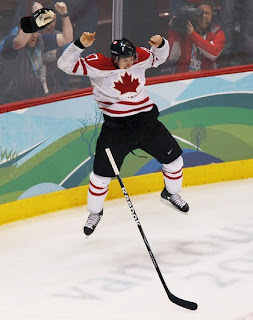 The National Emergency is over!

No, not the recession, the one about Sidney Crosby‘s missing equipment.
You may have heard that that his gold-medal winning stick and glove had been stolen.
Like everyone else, I immediately blamed the ridiculously cheerful Olympic volunteers, but it turns out the equipment was never even stolen.
The stick had been accidently shipped to the International Ice Hockey Federation. They initially thought it wasn’t the game winning stick, so it was included in a giant shipment.
The glove was found in Team Canada teammate Patrice Bergeron‘s hockey bag. It had been placed there accidently. Makes sense, in the above picture, we can see how well he takes care of his equipment.
Now that the countries biggest issue has been resolved. What else could we possibly talk about? Roll Up The Rim?