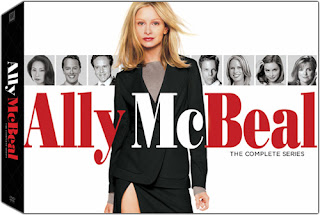 There are very few reasons why it’s appropriate to call in sick to work. Most of mine usually involve wine or television.

Today’s involved television.
Ally McBeal: The Complete Series is finally out on DVD today!!! I have been talking for months about this set and now it’s finally here! Can you think of a better reason to turn off your cellphone, close the blinds, stay in your pyjamas and eat Wavy Lays Chips, all before noon? I can’t.
A lot of people gave up on Ally as soon as Billy died, which they had every right to. But if they had stuck with the show, they would have seem some great story lines that got away from the dancing baby and ghost lawyers. My favorites was when Nell Porter (Portia De Rossi) finally fell in love with a man. The unfortunate part was that he was only on day parole and they one had a couple of hours together. I’m not sure why, but that one has always stuck in my memory as a great hour of television. And who can forget the Ally McBeal Car-Wash scene? That one still gets me all hot and bothered.
Included on the sets is The Practice cross-over episode that aires during Ally’s first and The Practice’s second seasons.
I think I feel a strong cough coming on.