Should I be watching Battle Of The Blades? 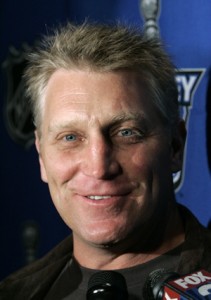 This morning, while curled up in bed with my laptop full of press releases, I was struck with one very important question:Â  Should I be watching Battle of The Blades?

The obvious answer is no. Itâ€™s a skating and dancing show that treads dangerously close to Dancing with The Stars, which in my books is always cause for automatic dismissal.Â  Not to mention, the CBC show contains hockey, which unless it has something to do with ducks being mighty, has never really done it for me.

On the other hand, the show is getting killer ratings.Â  Everyone seems to be excited about what can really be considered Canadaâ€™s first successful mainstream reality show. Iâ€™ve never been a trail-blazer, so if I see everyone else doing something, I feel like I should be doing it too. (Except eating at Arbys, Iâ€™ll never eat at Arbys.)Â  Secondly, unlike DWTS, the winner of Battle of The Blades gets a grand-prize of a charity donation to the cause of their choice.

But ultimately my decision to not start watching Battle of The Blades comes down to this little anticdote, for which weâ€™ll have to picture me back in bed reading my morning press releases.Â  The subject line of this particular press release read as follows: Brett Hull Announced as First Guest Judge to Rock Live Performances on Battle of The Blades. Pretty standard.Â  Except that Iâ€™m so out of touch with anything to do with sports, I immediately went to Itunes and searched Brett Hull.Â  I knew I had heard of him, yet couldnâ€™t think of a single song he had released. Was he on Glee?Â  No.Â  Did he do a duet with Bryan Adams?Â  Was he a Juno nominee?

As it turns out, he is a hockey player.Â  And not just a regular hockey player, during his impressive career he scored 741 goals, placing him third overall in the NHL. He has won two Stanley Cups: one for the Dallas Stars in 1999 where he scored the winning goal; and one with the Red Wings in 2002. Hull was inducted into the Hockey Hall of Fame in 2009 and is currently the Executive Vice President of the Dallas Stars.

So that is why I think itâ€™s best that I donâ€™t watch Battle of The Blades.Â  It just doesnâ€™t seem fair to the those participating, especially if I donâ€™t know who the contestants are.Â  Hey, I guess it is just like Dancing With The Stars.

Watch Battle of The Blades this Sunday at 8 p.m. on CBC.

battle of the blades, CBC