Shopping for a new TV comes with a personal touch.

I used to know everything about technology. I was the guy my parents called and asked their questions to. I would tell them what was worth their money and when they should hold off. If it was about TVs, DVDs, that sorta stuff, I was your guy.

And then something happened. All that stuff got complicated. Has anyone else noticed that? Somewhere between 1080p, 4k, Bluray, HD and Ultra HD, they lost me. I know that TVs and technology has gotten better, but with that I feel like it’s gotten more and more complicated.

So while some people can go and do all their shopping online, as tech as advanced, I’ve become more and more reliant on talking to humans. I know, how 1996 of me. But when it came time for me to get a new TV for the house that we just finished renovating, I knew the people at Best Buy could help us find exactly what we were looking for.

I am a blogger, so I can use the internet for some research, so I knew we wanted something bigger than 40″, the flatter the better, it had to have at least three HDMI ports and hopefully built in access to things like Netflix.

So armed with this knowledge, we went to the BestBuy on 17th Ave. SW here in Calgary and began the process of narrowing it down to which TV was best. But we weren’t doing it alone. I should never be trusted to buy tech stuff on my own these days.

Waiting for our arrival was a Best Buy employee Dexter. Over the next hour or so, I asked him every single question that I could think of. I swear, I put more thought into buying a TV than I do a single other thing concerning our house, and we just finished gutting a century-year-old him in Calgary. That’s how many questions I had.

But, like a pro, Dexter handled each question with a simple and understandable answer. We talked about the pros and cons of different TV features, how to improve the sound and cool add ons like Philips hue lighting. I found it interesting that we spent a lot of time talking about Universal remotes too. I was explaining how annoying it was that we needed four different remotes just to watch something on Netflix, which lead us to the discussion of Universal remotes. I mean, I know people used to use them all the time, but Dexter showed me some really cool features. That’s definitely on my splurge list for a little bit later bit down the road. 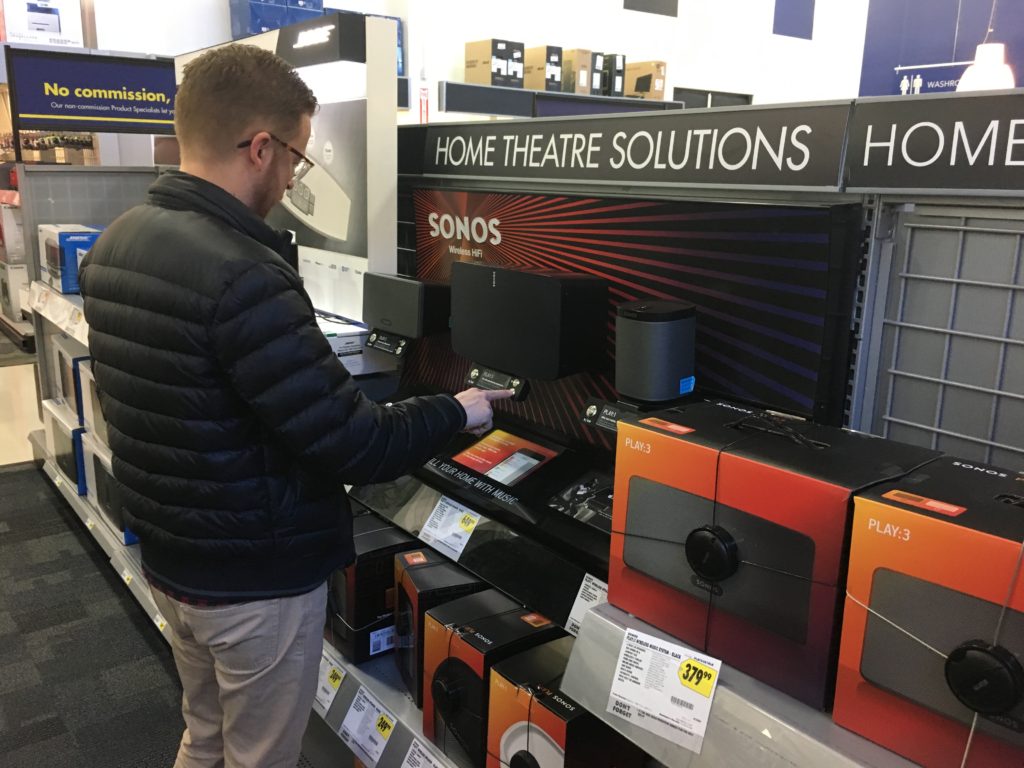 I’m certainly not new to Best Buy, I find myself there every few weeks. Sometimes to buy something, other times just to dream, but I’ve always loved the ability to talk to someone knowledgeable about something that I seemingly have less and less knowledge about. This experience was no different. Dexter handled each question like a pro, which eventually led us to the Toshiba 49â€ 4K UHD Smart TV. And while I may not fully understand how something can be both 4k and UHD, I was happy with the price point ($799) and the sleek design, perfect for a our small-ish house.

While the world is doing more and more research online, it’ll never be better than talking to a real life human, who makes important experiences like this one, exciting and fun.