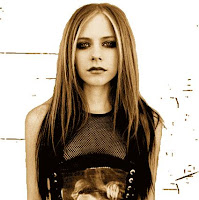 On the eve of the release of Avril Lavigneâ€™s third CD The Best Damn Thing, Iâ€™ve become reflective of mine and Avrilâ€™s short time on this earth together.

I remember the first time I saw Avril Lavigne. She was on MuchMusicâ€™s Much on Demand and then host Rick Camponelli was interviewing the very young looking Avril. Her first single Complicated was just released and you could tell that her appearance had more to do with appeasing a certain record company then it did her popularity. She was still very fragile in front of the camera, but tried to maintain her tough girl persona with her muscle tâ€™s and menâ€™s ties.

There was a moment during the show that she saw some she went to school with, you know before she dropped out. She couldnâ€™t believe that he was there. It looked like he struggled to remember her. It was a nice and awkward moment for the little Canadian. A real moment before her world exploded taking her to the heights of fame.

Confession time: I never bought the first Avril Lavigne CD, actually I stole it. Iâ€™m not proud but there was this one time I was volunteering for this post high school graduation party called Safe Grad and there were tons of prizes for the graduates. My now roommate Rebecca and I somehow got sucked into going and we were in charge of the prizes. I remember seeing the CD and quickly stuffing it into my bag. I wasnâ€™t and am still not proud of this moment, but boy am I ever glad I snatched it up.

For those of you who never listened to more than just the singles on her debut CD Let Go, you are missing out. I lost track of how many times I listened to it. It was a great mix of pop-rock songs that were harmless to listen. It was never too heavy or melodic. For me, it is still one of my favorite CDs.

years later she released her second CD Under My Skin. I remember when this CD was released because this time I actually bought it. I was working a random job in rural northern Quebec and drove around all day looking for it on the day of its release. Luckily the old reliable Wal-Mart came through for me and had a several copies. I thought about buying more than one, you know to make up for the stolen one, but decided that Avril would probably think I was cooler cause I had stolen it. So I just bought the one.

The CD was not even close to as popular as her debut CD, especially in the United States. But I was still a fan. The CD definitely had a harder age, but this is a pop-princess we are talking about it, not Slayer, so I still enjoyed it.

It was a couple months later that Avril came close to my hometown. Some friends and I, who were all closeted Avril fans, packed the car and made the 2-hour commute to see her.
I think anyone who saw Avril in concert would be surprised. Live, she has a much stronger voice than you would think. Her personality carried her through the concert effortlessly and we were pretty much the oldest people in the crowd, we still had a good time. And even though she didnâ€™t say it directly, we know we got a couple of points in Avrilâ€™s cool book.

Now with the release of her third CD, Avril is all married and buying mansions with her Sum 41 husband Deryk. She certainly has grown up in the 5 or 6 years she has been around. But judging from her awkward SNL performance this past weekend she still has a little bit of growing up to do.

Avril has never seemed perfect, or at least she doesnâ€™t try to be. Maybe thatâ€™s one of the reasons I like her. At the end of the day, no matter if you like her music or not, she is a girl who just had a dream of being a star and decided to work hard for it. If there is one thing Iâ€™ve learned from being an Avril fan is that life doesnâ€™t just happen. You have to make it happen. If a girl from northern Ontario can become one of the biggest things in music, just think of what you could do. Oh she also taught me that casual ties are never fashionable, ever.