Presented in Partnership with Shaw

Launching just a few weeks ago, BlueSky TV is Shaw’s new platform that brings voice command control to the comfort of your living room. If you’ve visited anyone in the States, it’s similar to that of Comcast’s X1 system.

I’ve been using the system pretty much since the day it was launched and I can tell you that not only has it made watching TV extra fun, it’s packed with features that ensure that you’ll always have something to watch.

The crowning jewel of BlueSky TV is the voice command remote. The great news is that it’s easy to use. I find often in cars with voice control, you have to know specifically what to say and how to say it. Not so with this remote. Say what you want and the remote pretty much always understands what you want.

Simple commands like “Watch HBO”, “Reality TV Shows”, “What’s on tonight at nine o’clock” take your TV surfing to a whole new level. I’ve found so many shows in the past couple of weeks, shows that I would have otherwise missed. I like saying things like “Show me Scary movies” or “Movies on now” just to see what’s on there. What’s really neat is that the system actually pulls show info not only from your cable subscription, but also VOD and CraveTV. So no more hopping back and forth between all the different platforms, they are all right there on the screen at the same time. It’s somehow made binge-watching even less complicated, and that’s something I can get behind!

The voice command for the remote also helps with the PVR Functionality of BlueSky TV. They are as easy as saying “Record” or “Record Planet Earth 2”. The system lets you record up to five shows at once (!!!), so my library has dozens of shows and movies that I hope to get around to watching some day. I mean, when you have that much space, why not record everything, right? To find the show I want to watch, I can just say “Find Homeland on PVR” and the episodes will appear!

BlueSky TV also comes with apps like stocks, weather and sports. So you can say “How are my stocks today?” or “What’s the weather outside?” and the apps will appear on the screen.

I think one of my favourite features of the voice command is testing its limits, and truthfully, there hasn’t been much it hasn’t been able to find. The remote is basically the person you’d want on your TV trivia team. You can hit the voice command button and “I see dead people” and it will know that you’re looking for The Sixth Sense. Same goes for any famous movie line. I’ve thought of all the big ones and it’s gotten it right 100% of the time. Fascinating! 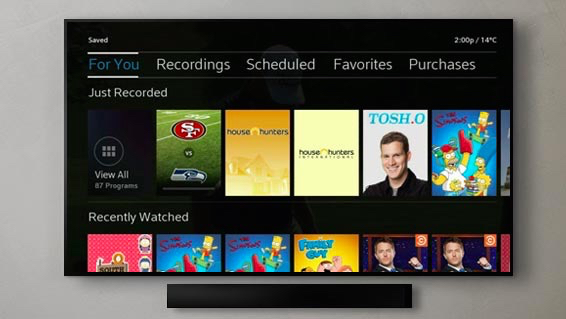 The system also adapts to real time with its Trending Feature. If you say “What’s trending” the most talked about shows on Twitter will show up, so you never have to worry about missing that moment everyone will be talking about tomorrow. One time it said The Simpsons was trending, so we turned it on just in time to catch an episode about Smithers being lost in the Alberta Rockies. Now that’s intuitive!

What’s truly amazing about this new system is that while I’ve had it for over a month, I feel like I’m just scratching the surface of all the things it can do. You can pretty much pick up the remote and start using it right away, it’s that easy. But the remote’s futuristic features are where BlueSky TVreally shines. Now if you excuse me, I gotta get back to my Happy Endings marathon.