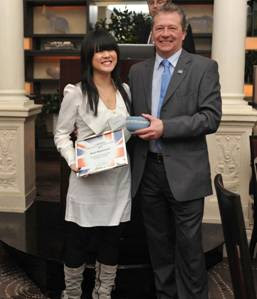 Cograts are in order for one of my favourite MTV Canada personalties, Sharlene Chiu!

The MTV News reporter was presented the Best Broadcast VisitBritain Travel Journalism Award for 2009!!!! I know that award sounds made up, but it is not. I checked!

The judges awarded Chiu for her work on MTV NEWS POUNDS BRITAIN, which they felt encouraged travellers of tomorrow and offered a different perspective on both traditional and newer city destinations.

MTV NEWS POUNDS BRITAIN was a special that aired in November and December 2009 which followed Chiu as she experienced the UK firsthand through the eyes of up and coming musicians. From Manchester to Sheffield and Leeds, over to Glasgow and ending in London, Chiu travelled with Glasvegas, Wild Beasts, The Crookes, The Big Pink and Speech Debelle.

You can watch the first part of the now award winning special here.
I defy you to watch and it try to figure out why Sharlene doesn’t have her own music show yet!
Congrats Sharlene!
aliya-jasmine, mtv canada