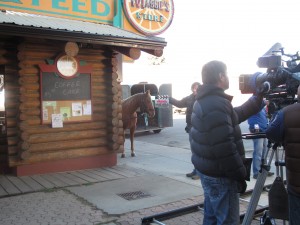 The impossible has finally happened. I have fallen for Heartland. I guess that means that I officially have to change my About Mike tab. Such a hassle.

The change of heart for CBC’s extremely popular family drama happened earlier this week when I was invited out to the High River set. Up until that point, I had only seen one or two episodes of the show that regularly clocks in more than a million viewers each Sunday night (seriously, who knew!?). In case you’ve never heard of the show, the popularity of the drama has, simply put, made itthe Road To Avonlea of the Facebook generation, except instead of PEI the show is filmed right here in Alberta.

In preparation of their upcoming holiday movie, I got the chance to interview the show’s star Amber Marshall, as well as Shaun Johnston who plays Grandpa Jack and Jessica Amlee who plays the pesky Kimmy Gibbler-esque Mallory. You can expect to read those interviews in the next couple of weeks. But all three of them were completely nice and I’ve actually already filed some papers with the Alberta Government to see if I too can be adopted by Grandpa Jack. But shhh don’t tell him, it will ruin the surprise.

For now, here are some pictures from my recent set visit. On this day, this were filming on location at Maggie’s Feed Store in High River. Interestingly enough, although the store looks 100% real and is located in the middle of downtown, it was actually built specifically for Heartland. It looks so real, that visitors to the town often try to get in to buy stuff. 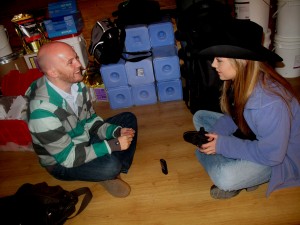 Having a comfy chat with Amber Marshall who plays Amy Fleming. 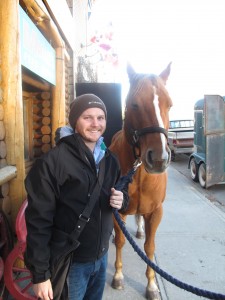 Just chillin’ with one of the extras. 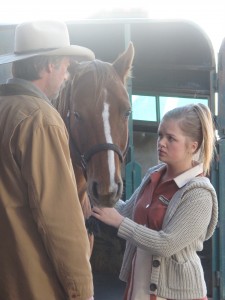 Shaun and Jessica film a scene about her horse.Â  Naturally. 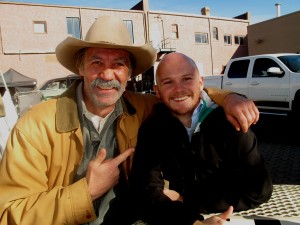