Scrubs is checking out tonight!!!! (Sorta) 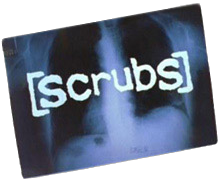 It’s done.
Kaput.
Finito.
That’s right guys the final episode of Scrubs is finally upon us. Â Well…maybe I should clarify the final episode of Scrubs on NBC is upon us. Â As expected NBC didn’t renew Scrubs for a final season when it announced it’s new schedule last month but fear not Sacred Heart fans because the big rumor is that ABC has already picked it up it’s last and final season to air starting in the Fall. Â So while technically this isn’t a series finale it’s certainly is for NBC even though you wouldn’t know it judging from their promos for the final episode which have been pretty non-existent. Â Oh well, why treat this amazing show any different than you have the last 6 years right?
I’ve slowly warmed up to Scrubs over the past couple of years. Â Mostly due to the fact for 6 months when I first moved to Calgary I didn’t have cable and it was one of the only shows my video store had on DVD. Â That and it also helped me ignore the spider bites I was waking up with every morning. Â Ahh first apartments. Â I’m glad it’s being renewed because with so few good comedies on the air right now and oh way too many crime dramas, I’m always up for a much needed laugh.
The other great thing about Scrubs being on the air is that we get even more Sarah Chalke (Elliot) who right now is playing double duty as the possible “mother” on CBS How I Met Your Mother. Â I will never understand the TV world and all their silly contracts but I we are all a little better for having a little extra Chalke in our lives.
Last Rock:
Tonight also marks the final episode of the season of the way too funny for it’s own good 30 Rock. Â I can’t believe we are having to say goodbye to shows just after they got back from that stupid strike. Â Life just doesn’t seem fair.