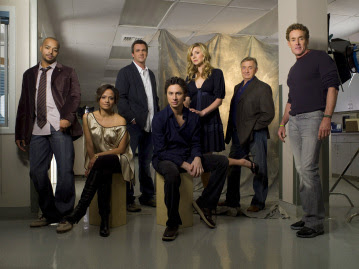 You how there is nothing to watch on Thursday nights?! Ha! Yeah right, well tonight it doesn’t get any easier when one of my favorites Scrubs makes it return for it’s 7th and final season! For the record you should be watching: (The Office, Sarah Silverman, Scrubs, 30 Rock and Grey’s Anatomy)

That’s right, Scrubs is finally wrapping up after season after season of countless time slot changes, lackluster ratings and network threats of cancellations.

I never really watched Scrubs till last year, after reading so many great things about it I finally decided to give the show a shot, boy I’m I glad I did. I quickly became addicted to this quirky comedy that knows how to balance the fine line of light hearted comedy with just enough drama.

This year the show is promising a lot of suprises. Isn’t it too hopeful for another Musical episode? Probably. But I’ve heard that Laverne will be making a return, well at least the actress who played Laverne (Aloma Wright) will be returning after her character kicked the bucket in a car accident last year. The writers have said that they are loyal to the actors they have worked with and wanted Aloma to work with the cast during their last year.

So if you can find the time in your schedule tonight it will defintely be to your benefit to add Scrubs to your itinerary, because after all don’t we all need a little more Sarah Chalke in our lives?