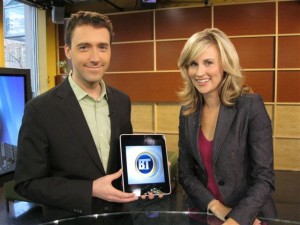 Even though Calgary’s edition of Breakfast Television has already gone through a ton of changes over the past six months, it looks like there are even more changes in store for the show!

The popular morning show saw it’s very popular host Dave Kelly step away in December, then came the nationwide City TV cutbacks which made the show slim down to three hours and lose a lot of it’s favourite personalities.

And now another departure is about to hit the station. Â While it hasn’t been announced on the TV show, an office memo was circulated to all Rogers TV employees that the show’s current host Susanne Fox will wrapping up her time on Breakfast Television this Friday!

No exact reason for the departure has been leaked, but it will certainly be hard to see her leave. Â I’ve worked with Fox quite a few times and we’ve always had a blast together! Â She’ll definitely be missed.

Since the show has yet to name a replacement for Dave Kelly, that means Breakfast Television will now be without any official hosts.

I happen to know a certain bald blogger who has a ton of free time. Â Especially in the morning.