Presented in Partnership with Samsung Canada

The way we enjoy entertainment is constantly changing, there are now numerous ways that you can consume movies, video games and YouTube video. For the first time, I am really enjoying watching my favourite content on a tablet – the new Samsung Galaxy Tab S3 â€“ to be exact! Check it out here.

Iâ€™ve been playing with it pretty much since the day it was released a few weeks ago, and itâ€™s made streaming video and playing online even more fun than I thought possible. And Iâ€™m literally always online.

I tend to rely on streaming services a lot, but if you want to use the Samsung Galaxy Tab S3 to build your own library, well thereâ€™s plenty of room to do it. The tablet comes with 32GB internal memory size, expandable to 256GB via microSD (card sold separately), which gives you plenty of space to store your music, photos, movies, and more.

The Samsung Galaxy Tab S3 has also been able to keep up with my Netflixing, all without ever worrying about the battery. This is incredibly good news for those lazy days binge watching for hours at home. The tablet has 12 hours of video playback, which means it has no problem keeping up with my usual kind of lazy day. And if I want to watch non-stop reruns of Downton Abbey, well, then I know I have nothing to worry about. 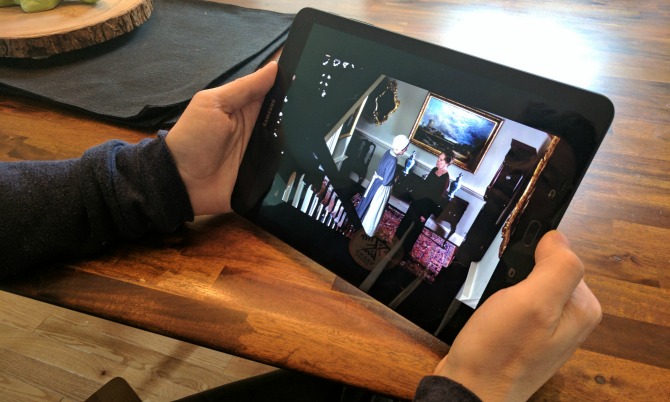 I basically devoured Mario Run in one sitting and thanks to the tabletâ€™s 9.7-inch Super AMOLED Display, viewing anything on Netflix or YouTube is really a beautiful experience. Itâ€™s bright, clear and easy to watch. While tablets can now easily replace bulky laptops, theyâ€™re getting to the point where they can match TVs too.

The S Pen is indeed mightier

So it turns out Iâ€™m a stylus person, who knew? The last time I used a stylus was with my great auntâ€™s palm pilot 15 years ago, but I think itâ€™s what Iâ€™ve been missing from the whole idea of transitioning more to a tablet-lifestyle. The Samsung Galaxy Tab S3 S Pen looks and feels like just like a real pen, and honestly within a few hours of unboxing the tablet, I was using the S Pen to write my emails and texts. I had sorta forgotten how fun writing was. The S Penâ€™s features are pretty incredible too. From the ability to write on the screen, Smart Select, and even translating. Iâ€™ve only had the tablet for a few weeks, and I feel like Iâ€™m just scratching the surface of the S Penâ€™s features. The S Pen features a ton of different pressure sensitivities and tilt detection, meaning that no matter how you write, the S Pen will work for you.

Iâ€™ll be writing about the Samsung Galaxy Tab S3 again in a few weeks, and Iâ€™m excited to see how I continue to adapt to its endless features. I can honestly say itâ€™s helping me stay on top of all my favourite shows so I donâ€™t miss an episode.