Russell Crowe on Republic of Doyle! 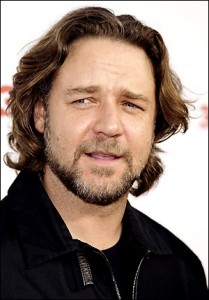 Hide the phones, there’s a big star coming to CBC’s Republic of Doyle!

Yup, the rumours are true, none other than movie super star Russell Crowe will soon be guesting on the detective series.Â  A few days ago the Gladiator star tweeted that he was in Newfoundland, and it was confirmed today that Crowe is indeed on the island to film a role for Republic of Doyle, when he tweeted: “Always find it hard to sleep before shooting…RoD, yes you heard it first,it’s your scoop.”

While some people might think it’s strange to see the Oscar winner on the series, but it’s actually not as far fetched as you would think?Â  The show stars Allan Hawco, who is very tight with Great Big Sea’s Allan Doyle (the band sings the show’s theme song,) and Doyle and Russell Crowe have been friends for years, playing shows together and even acting together in Robin Hood.Â Â  Phew.Â  Did you get all that?

There’s not much more information about Russell’s role on the show, but fans can expect to see it when the series returns in the first half of 2012.