Turning out to be quite a busy day in Calgary news/gossip, so I figured I will try to catch all the non-Calgarians up to speed.
Rumor:
Two Snakes have escaped on their own from the Calgary Zoo! They are probably hiding in the zoo’s drains.
TRUE!
They look like this (see picture below) and are apparently harmless. I’m obviously not going #2 until they are found. My record is seven days. (thanks tylenol 3!) 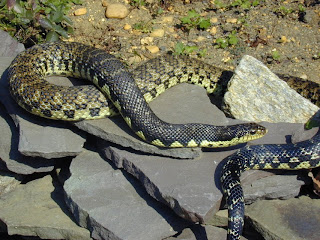 Rumor:
After nine years, Calgary Mayor Dave Bronconnier (see above picture) is not going to be running for Mayor!

He made the announcement this morning, but people are still curious because the announcement didn’t seem too official. Now that he doesn’t have a parking spot downtown, maybe he’ll finally realize how hard it is to park down there!