Ride a horse, save Suzie McNeil 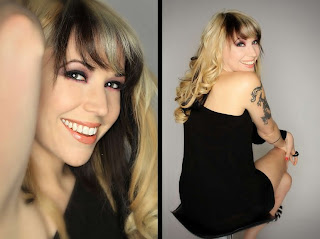 One of the highlights of last night’s Calgary Stampede was the grandstand show. I mean sure, there were the creepy circus dudes, randomly two people from SYTYCDC showed up and there were enough pre-pubescent kids on stage dancing provocatively to bring Michael Jackson back to life.

But the highlight to me was Suzie McNeil who sang a couple of different times during the 90 minute show.
I think I, and canada, need to start recognizing how talented this girl is. Beause she KILLED it on Sunday night. Whether she was singing from a moving platform sixty feet in the air or belting out her hit “Believe” with a chorus of children behind her,
Like Kelly Clarkson she has worked very hard at leaving her reality show past behind her. For those of you who don’t watch TV obsessively as me, she was the last woman standing on the ROCK STAR: INXS show a couple of years back.
I’ve always sorta compared her to a lesser P!nk but she is slowly breaking those perceptions away. I know she works hard because she is literally everywhere. She does big venues, small ones and all the while she seems happy to be doing it. Something that is lot on a lot of newer Canadian pop acts. Plus she seems everywhere and I’m still not annoyed with her. That is not something to shake a stick at.
So I’m here today to apologize to Suzie McNeil. I’m sorry for not respecting you before, but I do now. Well done.
Check out Suzie on Myspace and follow her on Twitter.
Suzie is also going to be a judge on the second season of YTV’s The Next Star. Like I said…she is everywhere.