Review: ‘Weird and Wonderful: Rufus Wainwright at the Jubilee’ 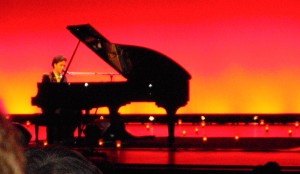 We were well warned not to applaud when Rufus Wainwright came on stage tonight at the Jubilee, and not to applaud between songs either, we were in fact told to hold out applause until Rufus had left the stage as his â€œexit was a part of the performanceâ€. Wainwright took the stage in a dramatically slow walk, emerging from stage right dressed in a long black evening gown, complete with a feather and sequin neckline and a 25 foot long train.

As he started his first song an image of an eye appeared on the giant screen behind him. The eyed was closed and colored black with heavy makeup. The giant eye blinked in ultra slow motion as Wainwright finished one song and, after a dramatic pause, went right into another. This went on for about an hour, images of one eye, blinking or opening and closing slowly for the first hour of the show, after which Wainwright stood up and with equally deliberate and slow steps exited the stage. I believe every song in this portion of the show was in a minor key leaving the crowd somber and a little stunned at what we had all seen and heard, this was far more performance art than it was a concert.

After another brief intermission he returned dressed in a more traditionally Rufus ensemble and then went on to play for another hour while interacting with the audience in a way you would expect from a performer of Wainwrightâ€™s renown. This is when he really shined for me, playing very active piano and letting his voice do the heavy lifting to the point that he, at moments, was drowning the beautiful tone of the grand piano he was playing. There is something about the tone of his voice that is just magical, he is able to hit deeply moving low notes and equally startling high notes while all the while keeping a depth and thickness of tone that is very rare indeed. He never missed a note tonight on either piano or vocally and there is no doubt that he is one performer that needs to be heard live to be truly appreciated.

Interestingly Teddy Thompson, son of English folk-rock legend Richard Thompson, opened the show tonight, he was charming and witty and has an outstanding voice, melodically he was very traditional but lyrically he had some surprises to share. For me the high point of the night was when both Wainwright and Thompson took the stage together to sing Leonard Cohenâ€™s near-perfect opus â€œHallelujahâ€. While I cannot pretend to have â€œgottenâ€ the first half of Rufusâ€™ show, nor am I even willing to admit that there was something to get, it was certainly a show I will not soon forget.