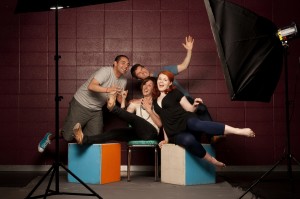 I’ve always kind of felt bad for theatre.Â  It seems either you like or you don’t, and it’s a rare production that has something for everyone, even if the thought of watching a play makes them go into a deep coma.Â  Hey, we’ve all been there.

The cast is solid.Â Â  It’s a small cast of four, who the most part, are on the stage for the entire length of the play.Â  The cast consists of Erin “Damn that voice is amazing” Breen, Scott “Look out Anthony Rapp“ Olynek (Jeff), Ksenia “The comedic chops of a pro” Thurgood (Susan), Guilly “fits like a glove” Urra (Hunter).Â  It’s the kinda cast that within in a matter of minutes, you know how good of a show it is going to be.

The show kinda reminded of 30 Rock.Â Â  Very insidery about the musical industry, lots of mentions of people that I’ve never heard of, but enough comedy and songs to keep a theatre-virgin content.Â  You can’t really ask for more than that?

Where the play falters is its length, the last twenty minutes aren’t interesting enough to keep the audience 100% engaged. It could be tighter and it could be faster.Â  It takes turn, when it really could have stopped. It’s not the end of the world, it just leaves you yearning for happier times.Â  But at the same time, I guess it’s definitely realistic.

At just under 90 minutes, Title of Show makes for a great night.Â  Especially if you are thinking of dabbling in the world of a theatre-goer.