Review: The Sound of Music 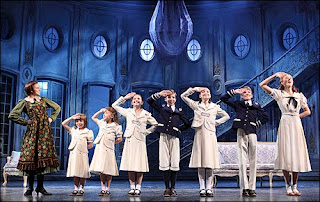 This week, one of Canadaâ€™s biggest musicals, The Sound of Music, celebrates
itâ€™s one-year anniversary at Torontoâ€™s Princess of Wales Theatre.

Surprisingly, I have yet to see the movie on which the show is based, so
Iâ€™m going to be honest when I say that I wasn’t too excited about the idea
of sitting through a musical that, when described to me, sounded an awful
lot like John and Kate Plus Eight, only with Nazis.

Simply put, The Sound of Music just isnâ€™t my spoon full of sugar.

Either way, I happen to like my musicals to be a little more offensive
(see Urinetown), controversial (see Avenue Q) and perhaps a little gory
(see Evil Dead). The idea of a guitar-toting nun singing songs with a
bunch of children wasnâ€™t exactly appealing. But Iâ€™m always willing to give
something new a try, so I decided to check the Sound of Music out.

Although I went into the show with enough cynicism to rival that of a Fox
News commentator, the show and itâ€™s star Elecia MacKenzie slowly broke me
down. As I actually enjoyed the show (with the lowest expectations going
in, mind you!), Iâ€™ve decided to take it upon myself to try to convince you
that maybe, you just might like it too.

Four Reasons Why You Might Like The Sound Of Music (That You May Think But
Never Admit):

-Cynical heart be dammed, those kids are cute and funny and they know it.
– The impressive and exuberant set changes will perplex even the most
veteran theatre goers. â€œUh, where did that giant moving mountain come from?â€ was
uttered more than once.
– The show is much more fun when you realize that you actually know 75% of
the songs already. It reminded of the last time I watched Wayneâ€™s World, I
was surprised how much that movie has penetrated todayâ€™s culture.
– Anwyn Musico (Liesl). Hands down, the best thing to hit the Canadian
musical theatre stage in years. She is ridiculously talented and it becomes
impossible not to watch only her when she is on stage. Hopefully Canada
can hold on to her, before Broadway or the West End come calling.
– The scenes featuring the nuns in show reminded me how much I loved the
hilarious movie Sister Act, and any musical that reminds us of the Whoopi
Goldberg classic is alright in my books. (Iâ€™ve heard rumors of a Sister
Act: The Musical, can anyone confirm or deny?)

If you have been holding out on seeing The Sound of Music because you
thought you wouldnâ€™t like it, you might be surprised! I know I was. And
with the show closing on January 3rd, you donâ€™t really have time to wait –
so get on it!