Review: The Kids Are Back (thankfully!) 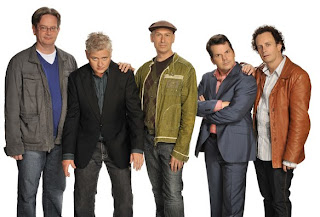 There are only a few things I’m ashamed in my life.

Correction: There are only a few things I’ll admit to being ashamed in my life.
One of them is the fact that I have never in my life seen anything to do with Kids In The Hall.
Deep breath. Calm Down.
Here is another for you, I didn’t know who Dave Foley was until Newsradio.
Like I said: ashamed.
When it was announced that there was going to be a new Kids In The Hall mini-series, I was finally excited to lose my virginity. Wait…aren’t you always excited to lose your virginity? Anyway, I was excited to watch Kids in The Hall: Death Comes to Town. Tonight, the show debuts it’s first of new eight episodes.
Just like in the original series, the Dave Foley, Bruce McCulloch, Devin McDonald, Mark McKinney and Scott Thompson play almost all the characters-men, women and a gothic grim reaper. The show is a complete clever and fresh twist on the classic murder-mystery that we’ve all sorta grown tired of.
If you are like me and have never seen the Kids in the Hall, the show is the perfect time to catch up on what we’ve been missing.
Here’s Five Things I learned from watching Kids In The Hall: Death Comes to Town.
1. No matter how much trauma has been done to you in your life, nothing will ever prepare you for seeing a leather-clad, overweight Grim Reaper-esque man on a bike. Nothing.
2. Out of the five guys, Dave Foley makes for the best woman. I think he might even be more attractive as a woman.
3. Air Conditioner Goat’s Milk is the new term for…um…well…you’ll see.
4. Fat Bastard has met his fatter rival. Yet, a perfect Mike Myers cameo-potential is wasted.
5. Two episodes in, I have no idea who the killer is. But I can’t wait to find out.
Kids In The Hall: Death Comes to Town debuts tonight on CBC Television.