Move over Carrie, Samantha, Charlotte and Miranda, there’s a new group of women in town, and they’re a lot drunker than you are.

The Real Housewives of Vancouver finally premieres tonight on Slice and if you haven’t already stopped reading, then this juicy and dramatic reality series is likely for you. Â In a bold move to choose Vancouver over Toronto, producers found five women who not only love being rich, they love talking to cameras about it.Â Christina Kiesel is free-spirited jet-setter, Jody Claman is the self-made businesswoman and fashionista. Mary Zilba is the singer and former pageant queen. Reiko MacKenzie is the adrenaline junkie with a need for speed and Ronnie Seterdahl Negus is a winery owner and luxury toy aficionado. 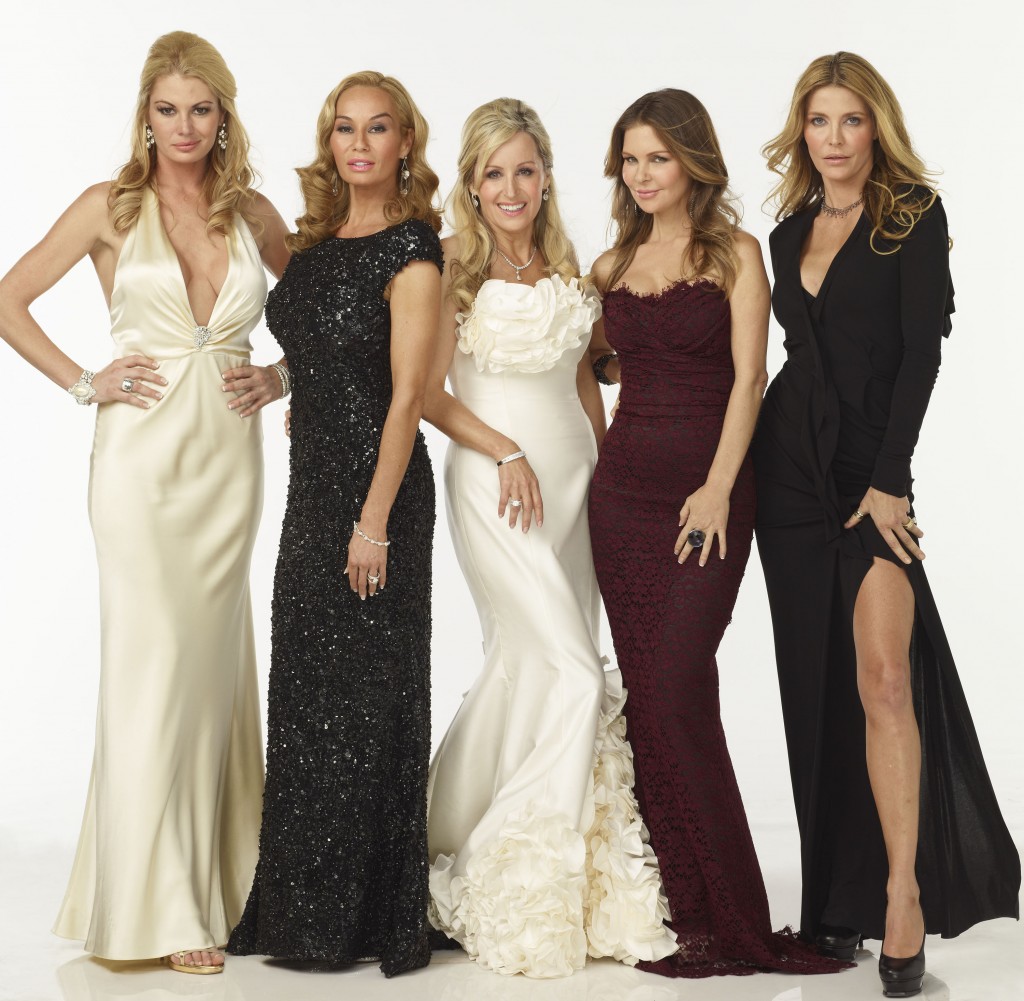 Of the women, Jody Claman (centre) is the most enjoyable and interesting, mostly because she actually works. At times, the ridiculousness of their lives seemsÂ apparentÂ to her, as she can’t understand why the other women have to be so dramatic, other times, she’s the root of the problem. She’s also the one that seems to have the least amount of plastic surgery and that’s saying something. Mary (second in from right), while very nice, turned me off right away with her delusional confession that she is a Canadian pop star. Uhhhh, we don’t have a ton of Canadian pop stars, but I know Mary is not one of them. I’ll happily be corrected,Â but I’ve never heard of her or any of her songs.Â (And we are a country that once had a song called TheÂ HamsterÂ Dance in the Top 40)

Truth me told, I’m annoyed at myself. Â I was supposed to have an interview with Reiko and Ronnie, but I was in a post Live! with Kelly haze and totally forgot that time zones existed, so I missed it. Â Damn you Sanford Fleming. Â But I wanted to ask them why they wanted to be on this show in the first place, because while it would be fun to have your own show, very, very few women escape the Housewives franchiseÂ unscathed.

The show looks just like the other franchises, but look closer. Â The need to get a juicy storyline or dialogue from these women, means there are lots of sloppy edits. One scene in particular, at a restaurant, sees the food appear, disappear, re-appear, then the menues come out, drinks, empty plates and then full plates again. I know that the show is supposed to be good fun and clearly everyone knows these reality shows are anything but, it doesn’t mean it has to look sloppy.

I also quickly wanted to talk about Kevin Chase , although I fear giving him any more attention, as he is likely googling himself as we speak. Â I’ve watched a lot of TV and never before in my life as someone come of instantly as unlikable . Although not one of the featured wives, his attempts to create drama and generally be an awful person are a distraction from what is otherwise a fun, light and juicy show.Â  The way he is blatantly pretending to be friends with Christina (far left) is both sad and embarrassing, for the both of them. Â  Two episodes in, he might be enough to make you tune out.

Things to enjoy about the show are definitely the material things: The houses, the cars, the fashion are all stunning set in an oddly sunny Vancouver. Â Now, I don’t know a lot about fashion (clearly) but I’m guessing the same women that flocked to any of the The Real Housewives…will be gaga over the dresses,Â jewelryÂ and fancy hairstyles.

I don’t know if I love The Real Housewives of Vancouver or hate it. Or maybe it’s both? Â All I know, is that either way, I’m definitely going to be watching.

The Real Housewives of Vancouver premieres on Slice tonight.