Review: The Boys in The Photograph

>Also available on The National Post’s The Ampersand. 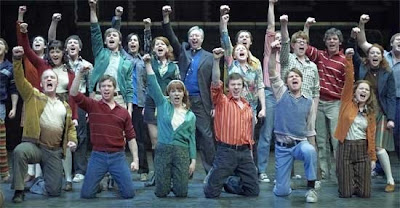 It’s not very often that you get to see a new Andrew Lloyd Webber musical. This weekend however, Torontonians were treated to the premiere of the Broadway legend’s and Mirvish Productions newest show, The Boys in The Photograph.

If you’re a fan of the musical, you won’t be disappointed by Boys. There is love and death. There are boisterous chorus numbers (The Beautiful Game) and heartbreaking ballads like the one sung by one of the show’s leads, Erica Peck. If her rendition of If This Is What We’re Fighting For doesn’t break your heart, then you are a cold, cold person.
Unfortunately, since The Phantom of the Opera’s heydey, the world of theatre has changed. In today’s economy, you are going to need more than Andrew Lloyd Webber’s name to make sure a musical sticks around and plays to full houses night after night. For a show to be successful, you have to be able to make it appeal to all – to boys and girls; to gay and straight; to young and old. Luckily The Boys in the Photograph, which was directed by the world-renowned Ben Elton, has something for everyone to enjoy. Here’s hoping that it continues to play with standing ovations, just like it did opening night!
How does it manage that, you say? Well, if you fall into one of the categories below, here are some ways in which it may appeal to you:
For the Soccer fan: I truly believe that you haven’t lived until you’ve seen a soccer match made into a dance number. It’s no World Cup final, but it’s definitely a close second. It’s like West Side Story’s fight scenes, only with bicycle kicks and over the head throw-ins.
For the History Buff: The show does a great job portraying the frustration and exhaustion of the youth living in Belfast in the late sixites and early seventies. By giving faces and names to the inter-communal violence that plagued the Irish capital, the musical almost made the country of Ireland another character to the story. I wish my knowledge of this time in Ireland’s history was better, only so that I would have appreciated the context of the play even more. Otherwise, make sure you Wikipedia IRA, just to be sure.
For the Ebay sellers: Watching the young and all-Canadian cast, it’s obvious that many of them will be around for a long time. Hang out by the stage door and get Tony LePage’s and Tracy Dawson’s autographs, anyone can see that they are stars-in-the-making. Trust me, your EBAY account will thank you.
The Boys in The Photograph is playing at the Royal Alexandra Theatre until November 1st. Click here to buy your tickets.