Review: Smug for a Reason-Josh Ritter and The Royal City... 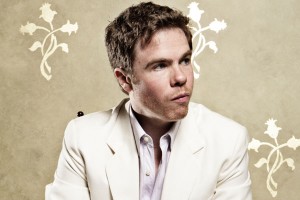 On Monday night, Josh Ritter and his Royal City Band took on the daunting echoing room at Knox United Church in Calgary, if you didnâ€™t know better you would have said that Ritter had a smug look on his face as he took the stage. He and his band seemed to have stepped out of another era, styled in clothes from a day gone by and playing vintage instruments. They quickly dug into material form their latest disc â€œSo Runs the World Awayâ€ and barely came up for air in their first nine or ten songs.

That was when the packed house found out what made Ritter so confident; armed only with his Gibson acoustic guitar he played the most memorable six songs of the nearly two hour set. His native Idaho accent peaked through the thoughtful lyrics of some of the most enduring songs of Ritterâ€™s decade-long career. He revisited beautiful melodies from songs like Roll On and transitioned to playfully clever favorites like Stuck On You.

Ritter carried the audience from what, at times, felt like a show that would have been more at home at The Grand Ole Opry with heavy handed steel guitar and a stand up double base to an all out rock show with driving drums and shiny sounding electric guitars.

Right when you thought that if you took a picture of this band you would find a group of men that were lost in the wrong era they did just that for you, freezing solid to form a striking tableau of musicians seemingly at the peak of their craft. Their instruments were silent and their bodies motionless for longer than any audience member would have thought reasonable but the inertia of the show kept everyone on their feet and clapping to the long-deceased beat of the previous song right until the moment when Ritterâ€™s knowing grin appeared again and the band sprung back into action as one unit, as though they had literally not missed a beat.

There were perhaps a few incidental Josh Ritter fans in attendance tonight that were surprised by the country twang but I will say this, it was the most fun Iâ€™ve have had in church in a long time.

————————————————
Dan Meades always gets pop culture trivia questions wrong; he finds himself politely laughing along when others make jokes about TV Celebs and it took him months to realize that Brangelina is actually two separate people. In fact he had to lie through his teeth just to get Bloggity to let him write music reviews. Some of the lies he told were that he was born and raised in St. Johnâ€™s Newfoundland and made a living as a George St. Musician through University. In fact Dan is almost completely tone deaf which makes it all the more remarkable that he can review concerts at all.
You can reach Dan at danmeades@gmail.com