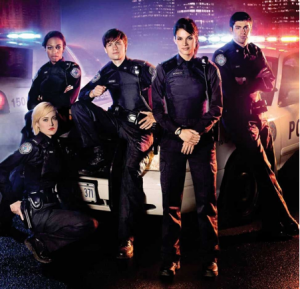 If you are dying for your Grey’s Anatomy fix, Rookie Blue is as close as you are going to get! (I’ll leave that interpretation up to you.)

The show, which was filmed in Toronto, premieres tonight on Global and on ABC in the states. And surely it is no coincidence that Rookie Blue premieres in Grey’s Anatomy’s usual timeslot.

The rookie cops of the Toronto precinct are young, beautiful, naive and most importantly eager. Â  Their bosses are grumpy, sullen and love to tease the new guys.

There is obviously nothing too new here. Â Missy Peregrym is enjoyable in the lead as Andy McNally, since her dad already works in homicide, she is the female cop with something to prove. Â She even gets called Bambi in the first day, but what fun would a show be if it started out with a strong, confident female lead be, right? And the Grey’s Anatomy comparisons don’t stop there. Â McNally even fights with an older cop who somehow ends up with his both his shirt and pants off, but don’t worry they don’t like eachother, so they probably won’t fall in love. See where I’m going here?

I could see how someone more cynical might not like Rookie Blue. Â  While it would have been refreshing Â if it wasn’t not be so by-the-numbers, it doesn’t pretend to NYPD Blue.

But this Rookie is like that boy or girl you date at summer camp. Â You know that it is never going to turn into something serious, but it is summer, so why not?