Review: P!nk blows my mind in Vegas! (Photos and videos)

All photos were taken with the Canon Powershot SX50 HS

In the hours leading up to Pink‘s concert in Las Vegas, I can count on one hand how many times I have been that excited for a concert. Since I got my tickets, anytime someone asked me why I was so excited, my answer was a rather bland: “I don’t know, it’s Pink!”Â  (For the sake of my auto-correct, I’m going to spell the artist’s name as Pink, not P!nk, as she prefers.) While she’s always been present on the charts, it’s hard to believe that Pink has sold more than 70 million albums worldwide!Â  That number just blew your mind didn’t it?Â  For some reason, she’s always been able to come in do her thing and then make a quick exit, avoiding the tabloid grabbing tactics that seems to justify today’s pop star. So, my answer may “I don’t know, it’s Pink.” But that was good enough for me to go see her show in Vegas. 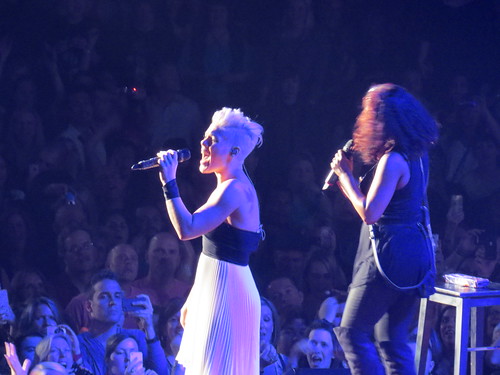 The show in Vegas was only the second stop on The TruthÂ  About of Love tour and what a stop it was. In the minutes leading up to the sold out show, the crowd at the Mandalay Bay Event Centre was exploding with buzz and anticipation.Â  Mostly because of Pink, but probably aided by the fact that many were enjoying Las Vegas’ slack drinking in public laws.

From the second the show started, Pink had the audience in the palm of her hand.Â  How could she not? The attention grabbing opening number, which saw her singing while performing aerial bungee stunts was incredible. Guys, she was singing “Raise Your Glass” upside down.Â  Amazingly, that wasn’t even the coolest part of the show. 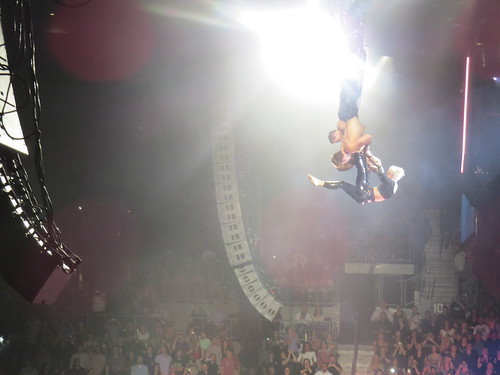 The nearly two hour show had the packed house singing, dancing, jumping up and down and I started to really think about the person on the stage.Â  (I know, I probably should have just sat back and enjoyed the show, but I always try to think about what the performing is actually thinking.)Â  Pink has always had the disadvantage of being labeled as a pop star, when in reality I’m not really sure what she is exactly. Sure, her songs get played on Top 40 stations, but to me, her talent puts her miles ahead of similar “stars” like Britney Spears. Christina Aguilera’s voice is amazing, but her attitude is atrocious, Rihanna is too whiny and Lady Gaga’s “weird for the sake of being weird” has never really interested me.Â  Oddly, I think I respect Pink more for staying out of the public eye, than the stars that magazines always feature.Â  The fact that I know so little about her, is likely what makes her more interesting than all the others. 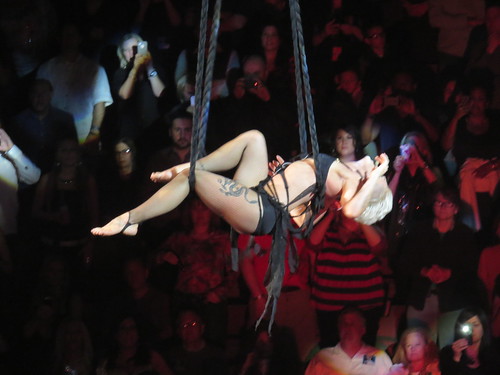 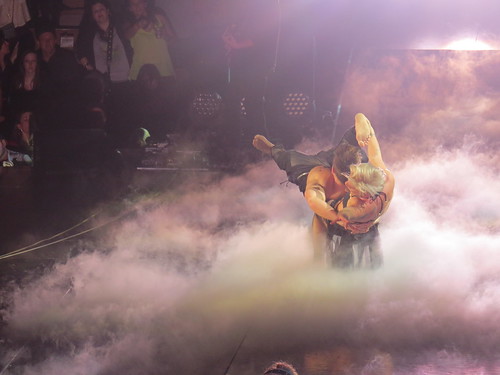 The show culminated in the final two eye-dazzling numbers. Â  For the party anthem “So What”, Pink was essentially sling-shotted from one side of the stadium to the other, stopping on podiums along the way. The audience, me included lost their minds. How was she doing that? Crazier still, was the fact that this is a touring show, so all the set up to perform these stunts, without nets or anything, is meant for one night only performances. It’s seriously mind blowing.Â  Her final number, “Glitter in the Air” saw Pink recreating her famous acrobatic Grammy number, using the art of Corde lisse (totally Googled that) throughout the song. At one point, she disappeared underneath the stage, only to be pulled up by the ropes,Â  now soaked in water, leaving the audience in awe, even though those below her were getting dripped on by the water. Singing live while suspended in the air and drenched in water? Yes, PLEASE. 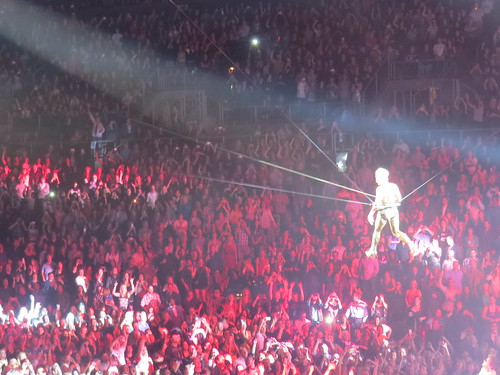 Throughout the night, as she flipped, twirled and swung around the stadium, I got chills.Â  Here was a performer who likely once stood in front of a mirror, sang into her hair brush and dreamed of being a star. And now, not only is she a huge star, she’s doing it like no one else ever before her. It was incredible.

The concert also reminded me of one very important thing: Pink can sing the hell out of any song!Â  From her big hits, to the quieter songs from older albums, strip away all the pyrotechnics and Cirque Du Soleil stunts and Pink is just Alicia Moore, which is quite alright, because that voice, that voice. Oh, that voice.

While she’s always been well received, Pink has never done a big tour ofÂ  Canada.Â  Besides the regular stops in places like Vancouver, Toronto and Montreal, the rest of Canada hasn’t had the fortune.Â  While Canadian fans might be frustrated, with this tour at least, I can understand. Not very many stadiums would be able to handle this show’s production, certainly not the low hanging Saddledome.

But there is hope for Canadians, because I saw this week, I think we’ve just seen the tip of the Iceberg. Luckily, Pink is here to stay.

Pink does have two Canadian dates, March 11th in Toronto and March 12th in Montreal. 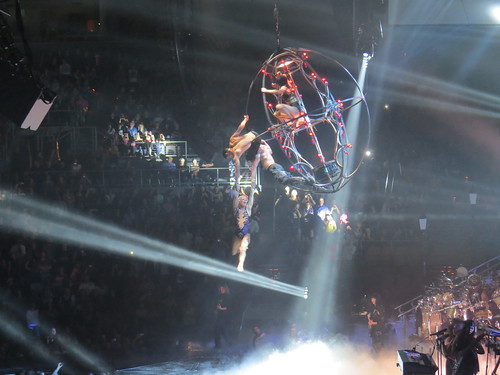 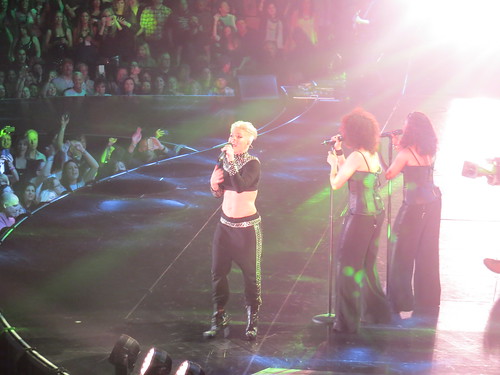 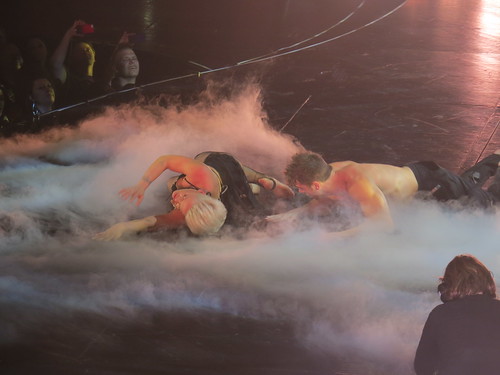 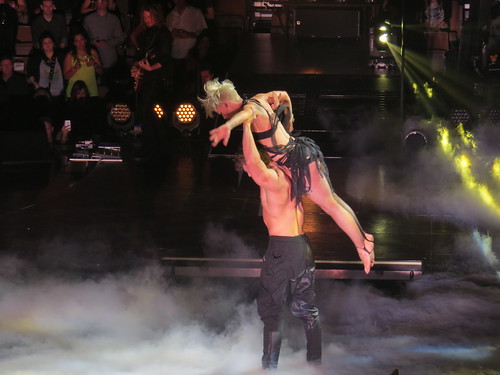 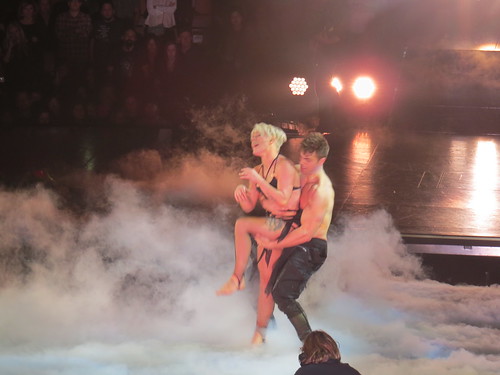 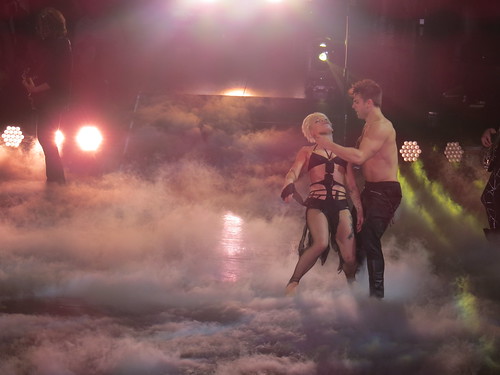 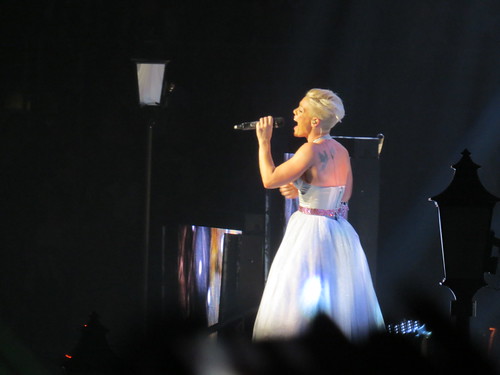 Here are some videos from the concert. Sorry the audio is kinda terrible. But they let you get the idea of some of the crazy performances.