REVIEW: Is The Lion King really for Grown Ups? 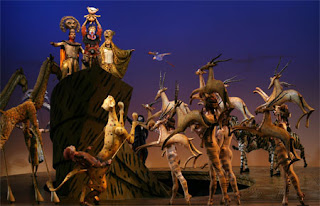 Living in Calgary has always had it’s disadvantages. Crappy public transportation, people who wear cowboy hats year-round and touring theatre productions.
Unlike Torontonians, that have their very own Broadway productions, we are often stuck with watching shows with mediocre casts and sub-par sets. So you can imagine my nervousness when I heard that Broadway Across Canada was bringing The Lion King to Calgary.
Without going on and on about how wonderful the show in Calgary actually was, I have to say even though it was my third time seeing it, the calibre was no different than when I saw it London and Toronto (which was during the peak of SARS, so I was just happy to pay half price).
But what struck me about The Lion King the third time around, was how much the story had changed for me, since I originally saw it as a kid. As with many things, being a naive child had protected me from the aspects of Lion King that actually make it less than kid-friendly.
Some of those points include:
1) For kids, Rafiki is the crazy and funny monkey that eventually brings Simba to his senses. As grown-ups, we assume that Rafiki is on some powerful drugs and wonder if she is the right person to be telling anyone what is right and wrong.
2) Any child can sit back and enjoy the music and the costumes of the Lion King. Any adult spends the majority of the show remembering that they never really understood what Hamlet was really about anyway.
3) As kids, you automatically assume that Scar is the bad guy and deserves what he eventually gets. As grown-ups, you quickly grow tired of Mufasa’s self-righteousness and begin to understand and appreciate Scar’s jealously….even if it’s just for a minute or two.
4) We’ve all had friends like Timon and Pumbaa. For children, they are great characters and show how easy it is to live a worry free life. The unfortunate part is that in the grown-up world their “worry-free” life, would have them eventually working at a video store or standing in the EI line. After all, Hakuta Matata doesn’t pay the bills.
5) The song “Can You Feel The Love Tonight?” takes on a whole different meaning than it did when you were ten.
The Lion King is playing in Calgary until August 30th.