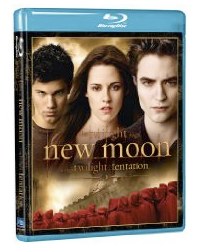 This weekend, thousands upon thousands of people lined up outside stores to pick up their copies of Twilight: New Moon. Even though most of those people have probably seen the movie dozens of times in theatres, they evidently couldn’t get enough of those vampires and werewolves. Even though I enjoyed the series when it was originally called Buffy The Vampire Slayer, I’m not afraid to admit that I have begrudgingly seen both Twilight movies.

So when the review copy of the movie showed up in my mailbox last week, I was little torn. I would look like a giant sell-out if I did a random review for the movie that I have frequently voiced my disdain for, but I would be a bad pop culture blogger if I completely ignored the popularity of the movie.
So I’ve come to a compromise, and here it is:
5 Reasons you should watch Twilight: New Moon (even though you really don’t want to.)
1. It was filmed in Vancouver and during a couple of scenes, you can play “Spot your Favourite Vancouver Hangouts.”
2. You can relish the irony of a devout Mormon writing a book that predominantly features buff men who can never wear shirts.
3. Oscar nominee and Up in The Air star Anna Kendrick is in it and manages to save every one of her scenes.
4. Speaking of shirtless men, I used the movie as motivation to go to the gym more. Then again, that is how I ended up like this.
5. The budget for the second film was significantly increased, thus resulting in fairly adequate fight scenes with cool graphics.

Now, does that make you want to watch Twilight: New Moon?