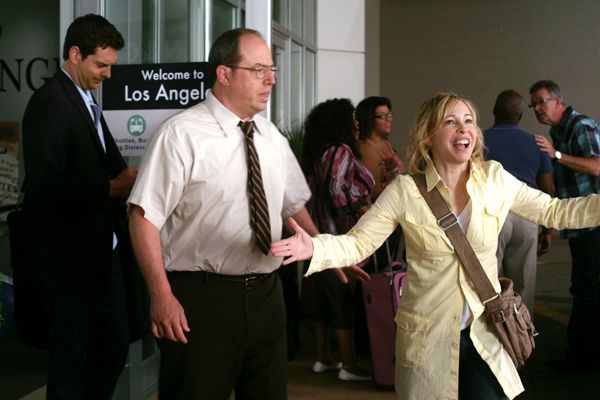 When CTV’s Hiccups premiered last year it was a ratings hit. Thanks to constant promotion during the Olympics, the first episode was watched by more than two million Canadians. That is a huge hit. The comedy tells the story of a eccentric children’s book author, Millie Upton (Nancy Roberston) who enlists the help of a life coach, played by series creator Brent Butt. The audience and critics seemed pretty receptive to the show, but then after a relateively quiet first season, Hiccups…disappeared.

Well it took a more than a year, but Hiccups has finally returned to the CTV line up just in time for the network’s revamped summer schedule. The good thing about coming on in the summer is that the competition is far less scary, so it could potentially give a really a hilarious show a chance to shine, Hiccups is not that show…but it’s oh so close.

The chemistry between Butt and Robertson is as solid as always, (working beside your real-life husband will do that), they let the zingers fly almost non-stop and Nancy’s character Millie is gloriously ridiculous and kooky. The two really could (and should) just have their own show. Which is perhaps this show’s biggest problem.

Where Hiccups stumbles is that it focuses too much on the supporting-characters that simply aren’t funny. Nancy Robertson and Brent Butt are obviously stars and some might argue comedic geniuses. So why doesn’t Hiccups just focus on them instead on the rest of the cast that simply can’t keep up. And you can’t really blame them, Laura Soltis, David Ingram, Emily Perkins and Paula Rivera are all known for their dramatic and sci-fi projects, it just feels like a really weird fit. For many, the lulls in laughter, will end up making the whole show not worth watching.

The show’s comparison’s to Corner Gas are unavoidable, the entire cast could deliver a joke and had amazing comedic timing, so much so, that it didn’t matter if the leads weren’t in the scenes, Hiccups isn’t there yet and I’m just not sure it’s worth the wait.