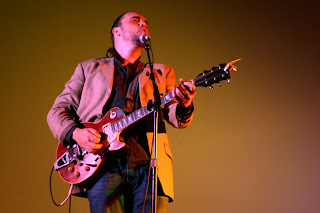 It’s been a couple of years since I first saw Hawksley Workman in concert. It was at the Banff Centre for the Arts and I was almost instantaneously enamored. I had gone as a friend’s ‘plus one’ and didn’t know much about the singer. Yet, within minutes, I knew I was watching something amazing.

Since then I have talked and talked about the concert. Sadly, most people haven’t heard of Hawksley Workman, but that didn’t stop me from blogging his praises. Out of all the concerts I’ve seen, that one stayed with me the most.

After two years of talk, I was beginning to fear that I had put Workman on an impossibly high podium of concert excellence.

On Wednesday night, I realized I hadn’t.

While the rest of the city was out celebrating St. Patrick’s Day, a thousand or so Calgarians were joined together to watch the always entertaining Hawksley Workman at the Jack Singer Hall.

Was the show better than the one two years ago? Hard to say, it couldn’t have been more different. It was still just as enjoyable, but for entirely different reasons. After all, keeping his audiences guessing, has always been one of his strongest assets. I’m starting to realize that you never know what you are going to get with Hawksley, but you always know it is going to be good.

I’m having a hard time describing what made the show so good. Some would say it was his voice, others his presence. Most would agree on it definitely the band’s outfits, which at times featured tightly fitting onesies. In the end, the hall was so packed of loyal Hawksley Workman fans, it was hard to say if he could do any wrong at all.

I will say that I wish he had a play at least a few more of his more popular songs. Most of the concert seem to be lot of his lesser known songs. Understanding, that those songs are often the artist’s favourites, it would have been nice to reward the less die-hard of his fans.

Hawksley Workman is continuing his tour by heading east. Whether you know his music or not, take a risk. After the concert, you’ll see that it might just be his favourite thing to do.