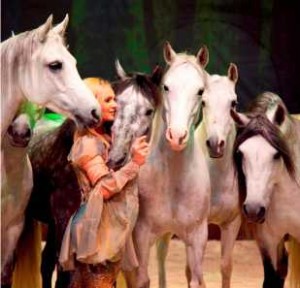 The thing about being media, you get to see a lot of shows. Some are good, some are great and inevitably, over time, you become more and more difficult to impress. Not cynical, just an over-reaching feeling that, “Yeah, I’ve seen that before.”

Well I’m happy to say that at last night’s premiere of Cavalia, I most definitely did not feel that way. Instead, I was blown away at what was visually, one of the most amazing things I’ve ever seen. A bold statement I know, but not one without merit.

If you’re not familiar with Cavalia, in it’s simplest form, it’s like Cirque Du Soleil with horses, lots of horses. I know what you’re thinking, “Can horses even be trained?” Turns out they can and they can do some pretty crazy stuff. Like Cirque, the show takes place under the big top, the world’s biggest actually. The show isn’t in the round though, instead it is set up like a regular theatre with a stage so big, it is the size of a football field. Granted, I don’t think I’ve ever seen a football field, but the stage was big.

There isn’t really a story to Cavalia, it felt like I imagined Christopher Columbus felt when he first discovered the Native Americans, only instead, the Native Americans are french speaking, horse worshipers, dressed in Renaissance clothing. The rest of the evening plays like a talent show, with some acts stronger and more impressive than others. (Cool: Falling ten stories, only to catch yourself on a rope. Less cool: A girl with a lasso.)

The second act of the show is where you really get your money’s worth, you’ll be left in awe at the amazing things the horses and their trainers are able to accomplish. I’m not going to spoil the surprise but
not only was the impossible made possible, Cavalia made it look easy. The show was made even more impressive by the fact that, many times, the horses were left to their own devices without saddles, harnesses or anything else. The evening’s highlight was most definitely the Horse Whisperer. I’m a believer.

Living in Calgary, you see a lot of shows with horses. They are so frequent that sometimes, the whole thing feels like a one-trick pony. But Cavalia is different, Cavalia is amazing.

Move over Stampede, thereâ€™s a new horse in town.