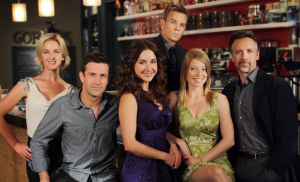 This is possibly the hardest review I’ve ever had to write.Â  Why?Â  Because I don’t know how to tell you a single thing about the show’s third season premiere without spoiling it.Â  Seriously.Â  The show takes such a drastic turn in the first five minutes, that it makes it impossible to review without ruining the whole surprise.

But what I can tell you is that Being Erica is still great. Especially, now it is infused with some Inception-like confusingness (new word?), which makes the show even more exciting. As with every season it has completely transformed itself and now has the possibility for so many new and different story lines.Â  Erin Karpluk has amazing control of her role as Erica and can perfectly adapt to comedy, action and drama.Â  I’m still upset about her missing Gemini nomination.Â  If CBC was smart, they’d send this episode in for consideration next year.

And that’s pretty much all I can tell you. Maybe we’ll talk more after you’ve all seen it.Â  I’d love to know what you think. Oh and fans of Julianne will be happy, she’s all over this episode like me to a McLobster.

EXCLUSIVE: Make sure you check back after tonight’s episode.Â  I’ll have a brand new exclusive interview with Erin Karpluk about the season premiere!!!