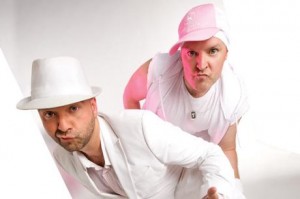 Well all strange things must come to an end.Â  I think that’s the expression, isn’t it?

This past weekend, the curtain closed on Calgary’s High Performance Rodeo.Â  In it’s nearly month-long, countless shows, exhibits, gallery openings and plays stormed the stages of this city to high praise and by people like me, a lot of confusion.Â  I got the chance to see three shows at this year’s festival: I walked out of Brian Eno‘s talk, was left happily dazed and confused by Smash Cut Freeze and then on Friday night, I finally got to see the much buzzed about Bash’d: A Gay Rap Opera.

I had heard about this show since it’s sold out run at last year’s Olympics in Vancouver and honestly never thought a show that sounded, well…so gay, would ever play in Calgary.Â  Let’s be honest, we aren’t Vancouver or Toronto. (It was only eight weeks ago that this province officially removed homosexuality as a mental disorder.) More shocking is the fact that this isn’t the show’s first run in Calgary and actually played at the festival three years ago.Â  (Here’s a great piece on the history of the show)

In it’s all too short run here at HPR, BASH’d brought an issue to the stage that isn’t really talked about in the city as publicly as it probably should be. I went to the show really not knowing what to expect.Â  Based on the words “gay, rap and opera”, I was probably hoping it would be an Avenue Q-esque satire on the gay community and its stereotypes.

I should have known better.

In the incredibly tight, fast-moving and emotional 60 minute show, BASH’d packs n heavy and immediate message that is not easy to immediately digest.Â  It’s hard, shocking and raw. You’ll want to laugh, cry and yes, even scream.Â  I know I did all three of those things, sometimes more than once.

BASH’d has already found success in New York City but for now, I hope that the show’s Canadian creators Chris Craddock and Nathan Cuckow continue to tour it around this country.Â  There is value to a show that leaves you aching, we just might not want to admit it.