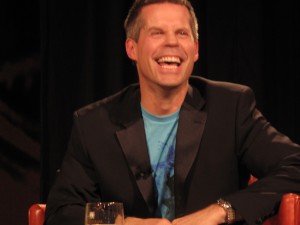 A new type of show premiered in Calgary on Thursday night and I was lucky enough to be there front-row centre to catch it all (no seriously, my giant, shiney head needs to get some power on it stat).Â  Avenue Live with Dave Kelly is a fun hybrid of a talk show bred with a theatre experience and youtube videos. It was taped live on Thursday night and then transferred online.

The theme of the first show was odds of success.Â Â  Avenue Live’s first two guests were hockey player Kelly Hrudey and Heartland actress Michelle Morgan.Â  Both the guests had great insight to their careers and shared their prospective on how they became success stories in their own industries. For a room full of people probably “trying to make it,” it was a fantastic option opportunity to get ideas from the insiders. The show cameo’s by Tara McCool (a friend of Hrudey’s) and Mayor Dave Bronconnier. 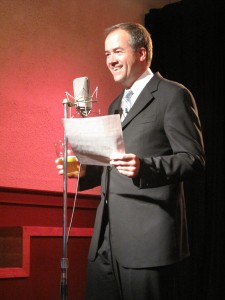 What worked was obviously Dave Kelly. Calgary’s most famous personality is also this city’s most liked.Â  This new show is a perfect example of why he such a success story here and why we don’t want to share him.Â  In Avenue Live he is charming, personable, funny and well rehearsed.Â  Those watching from home can’t see that he did the entire show without a teleprompter.Â  This is incredibly rare to see in any format of a show and should he should be praised for that. While Dave had cards, he rarely used them.Â  You could tell that the production team had rehearsed, yet were ready for things to comically fall apart if they had too and luckily, they did.

I’m also a fan of keeping both guests on stage and having them interact with each other. The comedy sketches were charming and allowed the show’s guests to shine.

What I didn’t like was the lack of bathroom breaks. I know that most talk shows wouldn’t have a break in them but most shows also don’t serve you beer before the show.Â  Maybe it’s my fault for breaking the seal but a ten minute intermission toÂ  run to the bathroom and maybe grab another drink would have been great. 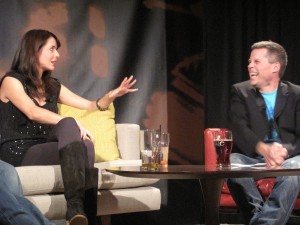 For now, the full enjoymentÂ  of the show doesn’t transfer that well onto the videos posted online.Â  I have a feeling there were some audio technical difficulties that will hopefully be resolved for the upcoming shows. Also and this is pretty small., the show’s opening title graphics make the show look pretty cheap.Â  It feels like you are about to watch a Mike Bullard video from his high school years.

I’m excited about Avenue Live with Dave Kelly.Â  I think it will be a great opportunity to show the rest of Canada that there is more to Calgary than just the Stampede and our dwindling Calgary Tower.Â  There is a huge arts & culture scene in this city and while we don’t show it off as much as say, Vancouver and Toronto.Â  It is wonderful to now have a venue to at least start trying.

Want to watch the show yourself?Â  Here’s the link to the video.