Review: All Grown Up: Jeremy Fisher at The Gateway 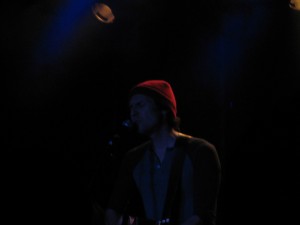 On Saturday night,Â  Jeremy Fisher and his four-piece band took the stage at The Gateway on the SAIT Campus in Calgary in front of a well-lubed college crowd. Â The show was posted online as having the doors open at 6:30 but the headliner did not take the stage until nearly 11:00, certainly this wait contributed to level of drunkenness of the crowd. Fisher is touring his album Flood which was released less than a month ago; this, his fourth full length album is his most mature and complete offering to date by far.

The set started with â€œShine a Lightâ€ followed by â€œNaked Girlâ€ and I was starting to wonder if we were going to hear the entire album in order. Â People were out of their seats and crowding in front of the stage dancing and clapping along to the straightforward rock beat that drove the action in the early part of the set.

After about seven songs in succession the band left the stage leaving Fisher alone with his acoustic guitar and loop pedal which he was using sparsely to make up for the fact that he was lone guitar player on stage. Now alone, Fisher started to play â€œLeft Behindâ€, a slow love lament from his 2007 album Goodbye Blue Monday. The mostly young party crowd wanted nothing to do with this slower tempo, more thoughtful melody and actually started clapping out of time with the quiet song until Fisher capitulated to their mood and broke into an ironic acoustic cover of C+C Music Factoryâ€™s â€œEverybody Dance Nowâ€. Fisher hid his frustration only slightly and tried to appease the crowd saying â€œcome on guys, I am trying to sing a love song hereâ€.

From that point on Fisher only played songs that could be easily danced to, he even (by request) played a spirited cover of Hank Williamâ€™s â€œJambalayaâ€ complete with harmonica solo.

Everyone at The Gateway had fun tonight, including the band, but I cannot help but think that we all missed out on what could have been a better show had we communally been willing to let Jeremy Fisher show us that he has moved past the obvious double entendre in 2004â€™s â€œLemon Meringue Pieâ€ and graduated to the thoughtful lyrics in 2010â€™a â€œMornings Brokeâ€, a song that is too slow and melancholy to get any air time this evening.