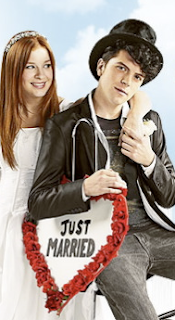 If you are under the age of 65, you probably don’t think as CBC as a place for comedy. I mean if you’ve seen one chicken shot out of a cannon, you’ve seen it all. And sure, I chuckle anytime Peter Mansbridge says the word Twitter, but I don’t think that really counts.
To kick off the New Year, the network is taking a bold step in the comedy direction with it’s newest show, 18 to Life. The show premieres tonight and stars former tween stars, Stacey Farber (Degrassi) and Michael Seater (Life With Derek, The Zack Files). The show is about two teenagers who decide to get married. Not because they are pregnant, but because they were dared to.
For me, Farber has always been the one to watch on Degrassi, and on this show she is giving a bigger and meatier role to chew on. She is a nice-fit for the sweet and tangy role of Jessie. And one episode in, she seems completely angst-free and Jessie hasn’t had to cut herself or wear black eye-liner once. So that’s already a plus!
I’m admittedly late to the Michael Seater-train. But I know enough to know that Canada’s little tween darling. In a more grown-up role and as the newly married Tom, he is charming and is a nice fit with Farber.
Right now the strongest aspect of the show are the teen’s parents. Similar to Dharma and Greg, Tom and Jessie’s parents couldn’t be more different. Tom’s are a conservative jewish family, while Jessie’s couldn’t be more left-wing. The dialogue between the four differing adults is sharp and funny. It will be interesting to see how the parents deal with each other, now that they are related.
While this doesn’t really have anything to do with the quality of the show, I kept finding the sets very distracting. Tom’s house looks like it was decorated in the 70’s, which is weird considering their kids were born during the late 80’s and 90’s. I know that some people have bad taste, but the sets just seemed lazy. I’m chalking it up to being a pilot/budget thing. Here’s hoping Mike Holmes finds himself guest-starring soon.
The pilot itself is a strong start for the series, which is not always easy for pilots, which usually get tied-up in telling too much story for one episode. I think the characters are strong enough to make this show a solid addition to slowly growing CBC line-up.
18 To Life premieres Monday, Jan. 4 at 8 p.m. on CBC Television.
stacey farber