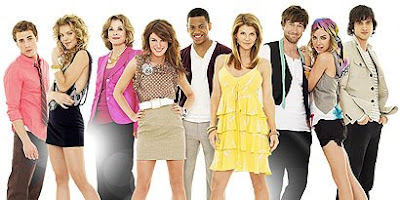 This week is one of my favorite weeks of the entire TV season.  This is Upfront Week which means that this is when we here what the networks have in store for the Fall 2008 television season.

So far many of the shows that I have been worried about have already been saved.  Like I mentioned last week, it was confirmed that Scrubs is indeed returning next year for one final season only this time it will be on ABC.
I was surprised by how much I enjoyed The New Adventures of Old Christine so I was concerned when many insiders said that it wouldn’t be returning.  Well they couldn’t have been more wrong because the show fronted by Julia Louis Dreyfus will be returning to CBS with a full 22 episode season order.  This shows that CBS has a lot of faith in the show especially cause it only had a 13 episodes season this past year.
Another show that was in trouble on CBS was How I Met Your Mother.  But fear not, this great show will also be returning.  Hopefully with less Britney and more Sarah Chalke.
So what shows aren’t coming back?  Well so far Men In Trees, Moonlight, Women’s Murder Club, Miss/Guided, October Road, New Amsterdam, Jericho, Beauty and The Geek, Shark, Bionic Woman and Aliens in America have all gotten the axe.  I don’t seem to distressed because I honestly forgot most of these shows where even on the air.  Which I guess was the problem.  I am so relieved that for at least one season I don’t have to say goodbye to one of my favorites.
Which brings us to the biggest announcement of them all.  This fall struggling network will be bringing back one of the most famous high schools of all time.  That’s right, West Beverly High will be opening it’s doors again to a whole new group of residents from the 90210 zip code!!!! The classic Aaron Spelling drama that pretty much taught me things that I had no business knowing will be getting it’s own spin off this fall a full 8 years after it went off the air.  While there aren’t any official alumni of the original show cast as regulars, both Kelly Taylor (Jenny Garth) and Donna Martin (Tori Spelling) will be popping up as a guidance counsellor and a parent respectively.  The new cast does feature some familiar faces.  Canada’s own  Shenae Grimes (Degrassi TGN)will be playing one half of the brother sister duo that move to Beverly Hills.  Surely I can’t be the only one to notices that fellow canadian Jason Priestly pretty much played the same role?  The matriarch of the kids will be played by Aunt Becky…oh I mean Lori Loughlin and her mother will be played by Arrested Development favorite Jessica Walter.
They haven’t filmed the pilot yet but they are going to have one hell of a trashy reputation to uphold.  YOu don’t go messing with millions of peoples childhoods.  I am just now warming up to Degrassi: The Next Generation.  Here’s hoping that we get some other old alumni popping up on the show.  What ever happened to Valerie?