Rebuilding after the flood: Two ways to help.

First things first, I must apologize because the blog’s been slow. And since this blog’s name is Mike’s Bloggity Blog and I am Mike, there’s no one to blame but myself.Â  But the truth is, the Calgary floods have consumed much of my life. From being evacuated myself, to helping to clean out people’s homes and helping to come up with ways to help people get back on their feet, It’s been a wonderfully exhausting, fulfilling and heart breaking experience.

So, I wanted to share with you two things that I’ve been working on to help Calgary and its amazing citizens bounce-back better than ever. 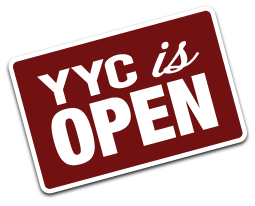 Richard Einarson and I were trying to come up with some way of helping small local businesses and since he’s good at digital marketing and I’m pretty good at social media stuff, it was pretty exciting when we developed YYC is OPEN and people got behind it so quickly.Â  The idea behind the site is really to create a movement or campaign to help support the small local businesses that were heavily affected by the floods. Whether they were closed for days because they were in the evacuation area, or lost their produce and supplies because of lost power or even complete devastation, the 2013 floods will make it hard for a lot of businesses to survive.Â Â  So we wanted to plant the seed in as many people’s heads as possible, that there are lots of ways to help those affected by the floods, even if it’s just eating, shopping or spending in one of the areas that were hit hard by the rising waters.Â  Even though areas like Bowness, Inglewood and Mission have been open for days, there’s a lot people who think it’s too hard to get down, or maybe they feel weird being around the devastation. But the fact of the matter is, it’s that these businesses need our help, they need our money and they need our support. So YYCisOPEN is asking people to hit the streets, go shopping some clothes, eat at that new burger joint, try someone new for your dry-cleaning, do whatever you think you can do to help these small, local and independent businesses.

When the CADA reached out and asked if I could help the artists and arts organizations that were affected by the floods, I instantly said yes.Â  The project is called Alberta Arts Flood Rebuild and it’s fundraising initiative set up on InvestYYC.com (Think Kickstarter but for Calgary’s arts scene.)Â  The project has a lofty goal of $500,000, but with big companies are agreeing to match donations, I don’t think it’ll be long until we bust through the goal.

So why do artists and arts organizations need our help?Â  Well, when the water started rising, hundreds of them were put a risk. Many lost their studios, their work, really, their livelihoods. The organizations lost their offices, supplies, had events canceled and lost revenue.Â  While the water didn’t seem to last for long, it had a terrible effect on the city’s arts industry and it’s something that definitely needs our support.

So take a look at the Alberta Arts Flood Rebuild project and please donate what you can.