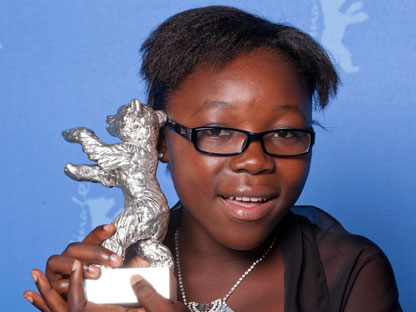 We’re just a few days away from this year’s Oscar telecast, but that doesn’t mean a lot of people are already thinking about next year’s ceremony, especially those who have films that are just premiering to acclaim at this year’s festivals.

One film that will certainly have Oscar voters attention next year is Quebec’s War Witch, which just picked up a big award at the Berlin Film Festival. The film starsÂ Rachel Mwanza, a 15 year old who plays a girl who is kidnapped by rebel soldiers in Africa, forced to kill her own parents and becomes theÂ mistressÂ of the rebel leader of the rebel army.

Woah. That’s heavy. Â Asterisk and Obelix this is not.

Anyway, even though she can’t legally drive a car, Mwanza picked up the Best Actess award at the film festival this past weekend.Â She accepted the Silver Bear award for best actress from jury member Jake Gyllenhaal. Talk about a big night for the young star!

It’s a little too early to know what this means for next year’s Oscars, but it’s a big step toward the red carpet.

There’s no release date for War Witch, I think that will depend on how well the film continues to do a film festivals.