Proof that Mayor Nenshi is the world’s best mayor!

The world is about to find out what Calgarians already know, because it’s just been announced that Mayor Naheed Nenshi has just been shortlisted for the title of the world’s best mayor.

The 2014 World Mayor Prize is awarded by the City Mayors Foundation and if Nenshi is able to beat out the other 25 mayors in January, he’ll be the first Canadian mayor to do so!

Since Mayor Nenshi surprised everyone when he won his way into City Hall in 2010, thousands of people have been enjoying his unique way of interacting with both his constituents and politicians alike.

If the City Mayors Foundation is looking for further proof, I’ve gathered of some his best moments!

He’s not afraid to answer the big questions:

He’s really concerned for our health:

He makes sure we only have the best to eat:

He can’t believe that he has to tell us things: 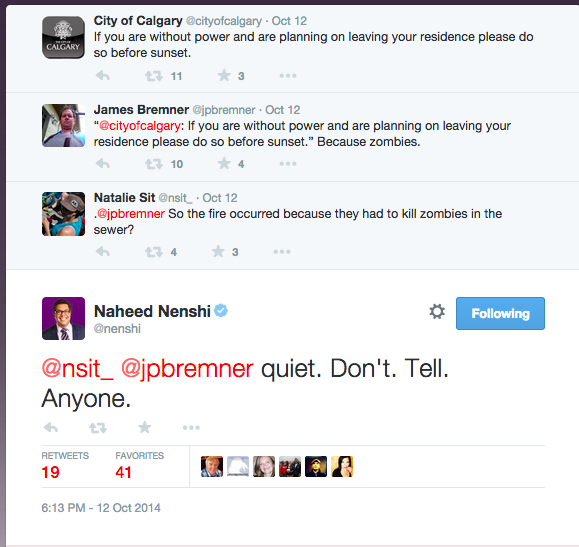 He knows how to handle the press:

He’s a bit of a geek

A selfie with some of the guests of @Calgaryexpo this year. #POWParade pic.twitter.com/zDkkjVQH82 â€” Naheed Nenshi (@nenshi) April 25, 2014

And finally, he’s not just a mayor, he’s also a teacher:

No. Wasn’t me who stole your dictionary. #stillwrongspelling RT @HeavyRent: @nenshi ur a thief.

does poor spelling make one a moron? #Tooeasy RT @HeavyRent: @nenshi @killarneyyyc your a moron!

@suzyboy_q a little less weed, a little more social studies. That would be the federal government.